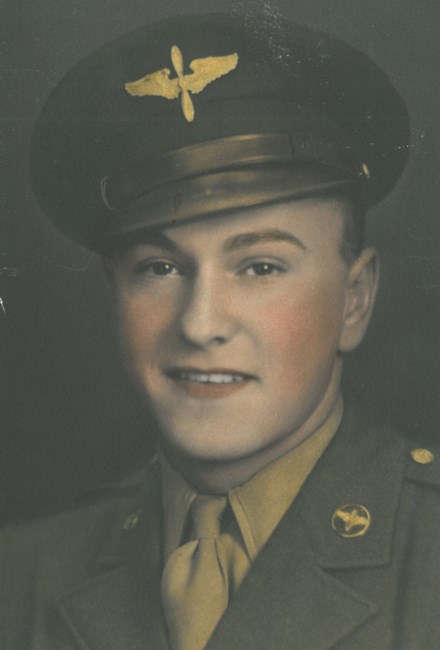 George Domitrovich of Portland, Oregon, 94, passed peacefully at 9:00 am, on July 4, 2017. In WWII, after Army Air Corp college, SGT George Domitrovich flew in the 8th Air Force, 487th B-17 Bomb Group, 837th Squadron, where the crew's B-17, the Picadilly Lilly, of which he was right waist gunner for, was stationed at Lavenham, England. On Feb. 6, 1945, after completing its 10th mission over Normandy, it was shot down. George bailed out and was immediately captured by Nazi Germans and held captive as Prisoner of War until war’s end. He returned home and married Ozetta L., his sweetheart of six years, Jan. 19, 1946. Born April 30, 1923 in Coos Bay, Oregon, he was the seventh and youngest child of Augustine Domitrovich and Eva Sutej of Vinica, Slovenija, whom had come to America to live on Augustine's brother's farm; work in the Northport, Washington mines, and his mother to become head cook at The Beanery, cooking her Slovenian recipes for the miners who came from all over for her great cooking. They stayed at Ellis Island until they learned the English language, became Naturalized citizens, so as to work and be self sufficient in America. His machinist career began at Iron Fireman Inc.; however, soon went to work for Tektronix Inc., where he retired after 33 years. Afterward, he devoted more time to restoring old Classic V-8 Fords; frame to completion. He served as a project manager for the Portland Swap Meet for 40 years, until 2016. Was an active member of the Columbia River Chapter of POWs of America. George is survived by his second daughter, her husband of 41 years and their daughter; four more grandchildren from his first daughter, and their five children. www.lincolnmemorialpk.com In lieu of flowers, please make donations to the Wounded Warriors Project or St. Judes Childrens Hospital
See more See Less

In Memory Of George Domitrovich