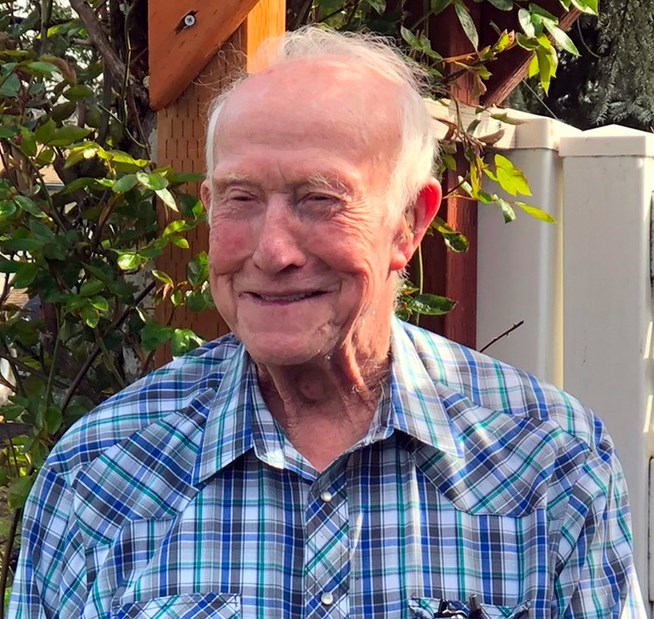 On Sunday, January 15, 2023, Harold Dean Blackmer, loving husband, father, grandfather, and great-grandfather passed away at age 90. He was born on March 25,1932 in Boise, Idaho to George and Edith Blackmer. With stark red hair from birth, he quickly adopted the nickname “Red”, which followed him throughout his life. Another trademark feature was his cheeky grin, identifiable in photos from as far back as toddlerhood. He was the seventh of eight siblings: Sarah, Leila, Zella, Bert, George, Gib, and baby Frankie, who passed away as a baby. He grew up poor during the Great Depression, but was never bored with his siblings, roughhousing, inventing games, and creating their own toys when not doing farm chores. He attended Eagle High School in Eagle, Idaho and graduated in 1950 in a class of 21. Logging camps kept him busy as a teen, where he took flying lessons in the logging plane, a skill that would prepare him for life as an Air Force pilot in the Korean War. The majority of his time in the service was spent at Hill Air Force base in Ogden, Utah as a classified courier, from 1950-1953. His missions allowed him to see much of the world. Red met Ruth Ellen Stumpp the summer of 1953, during a visit to an Ogden nightclub. His confidence landed him the girl(after some persuasion) after he proposed to her the first time he saw her from across the dance floor. The love birds were married December 19th,1953. They welcomed their first child, Jeffrey Hal Blackmer on August 17, 1954 in Odgen. The family moved to Portland, Oregon in 1957, and Red soon found work in auto shops, putting his military mechanics training to work. Liane Sheryl Blackmer, their second child, was born on January 20, 1959.Their third and final child, Scott Patrick Blackmer, was born April 2, 1963. The happy couple enjoyed going out dancing throughout their marriage, and were known for their themed square dancing costumes and their stellar business partnership. In 1972, Red and Ruth opened their own mechanic shop in Portland, calling it Red Head Auto Service. Red was the head mechanic and Ruth handled the bookkeeping. After 20 years, they sold the shop and retired. The couple made many memories vacationing in places such as Acapulco, Spain, Morocco, the Bahamas and Hawaii. The family spent summers water skiing and fishing, traveling to family reunions and National Parks. Red was also a Boy Scout leader for his sons when they were young. After their children were grown, Red and Ruth bought a motorhome, and spent much of their time exploring the western United States and Mexico with their siblings. Red was a passionate Christian, outdoorsman, woodworker, welder, gardener, and all-around fix-it man. He stayed busy throughout his retirement creating beautiful things from seeds and scraps for his family and the community to enjoy. He adored his grand and great-grandchildren, and treasured his time spent with each one. When Ruth passed away on January 13, 2012, Red’s grief was great. He spent many nights in Dayville, Oregon, on the property of a dear friend where he did much hunting, fishing, camping, and healing. Red adopted the puppy who would become his best friend and lifeline, a husky named Bear, who would keep Red going in his darkest days. In the following years, Red found friendship and companionship with Barbara Walter. The two supported one another in the loss of their spouses, and eventually fell in love. Red and Barb were married on August 29th, 2020. His heart grew to love Barb’s adult daughters, Sherry and Debbie as well as Jan, a close family friend, and in his final season of life, they would all call him “Dad”. Barb, Bear, and all of his children were by his side to care for him through his good and bad days until he was delivered Home. He is preceded in death by his wife Ruth, his parents, and siblings. Red is survived by his wife Barbara, his children, 9 grandchildren, and 8 great-grandchildren. When interviewed about the legacy of his life, he summed up his perspective in the following: “I may not have lived the most exciting or adventurous life, but my family gives me everything I need. I get the most joy and fulfillment out of helping them.” Written by Heather Ensign A memorial service will take place at Clackamas County Bible Church, 15655 SE Johnson Road in Clackamas, on Saturday, January 21, 2023 at 10:00 am. Mr. Blackmer will be laid to rest with his wife Ruth in private services at Willamette National Cemetery.
See more See Less

In Memory Of Harold "Red" Blackmer