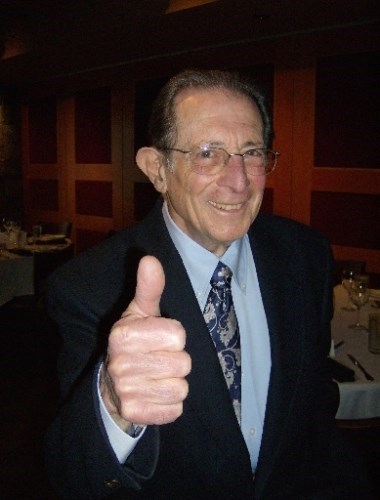 Joseph Galati was born in Southwest Portland, in the St. Lawrence Italian-American neighborhood in 1926. As a young musician, his talents as an accordion player were featured on local Portland radio shows. He attended St. Lawrence Grade School and Benson High School. In World War II, he served in the Navy's Pacific Fleet on the aircraft carrier Commencement Bay as the Captain's Orderly. He studied mechanical engineering at the University of Portland and explored a vocation at Mt. Angel and St. Edward's Seminaries. He met Joan Marie Gagnon at a YCW (Young Christian Workers) dance. They married in 1960 and lived in Southeast Portland in the same Pine Street home for over 60 years. He was a devoted husband and father to their three children, making many sacrifices for their education. As a craftsman, he reveled in building projects. He built a marvelous backyard tree fort for his children, and a party room with a huge table, big enough for all family members to gather around at every holiday. A devout Catholic throughout his life, he served All Saints Parish as Sacristan for over 30 years, caring for parishioners and managing preparations for Mass, funerals and weddings. He was a daily communicant. Joseph practiced his faith by following Christ's example, living his life in the service of others. He helped a family member overcome mental illness by attending Recovery International meetings together, and then went on to lead meetings promoting mental health for 25 years. He was humble about his service, but was a light for all to see, leading by example. As an engineer and salesman at Power Transmission Products for over 30 years, his designs solved industrial problems using motors and hydraulic equipment. His projects ranged from working on the dome at Trojan Nuclear Power Plant to designing a pully system to fly Peter Pan over the audience in a St. Mary's High School play. He generated over a million dollars of sales annually in the 1970s, a remarkable accomplishment. When he retired in 1989, he and Joan were sent to Rome as a retirement gift, since he was known around the office as "the Pope." He remained vigorous into his 90s splitting wood, golfing, and tending to his prized vegetable garden. Joseph is survived by his wife, Joan; children, Gregory (and Colleen Arnold), Stephen (and Karyn), Maria (and Dave Markowitz); and his five grandchildren, Justin, Aaron, Sophia, Aidan and Benjamin. We love him and we will miss him dearly. It is hard to say goodbye to this great and good man.
See more See Less

In Memory Of Joseph A. Galati