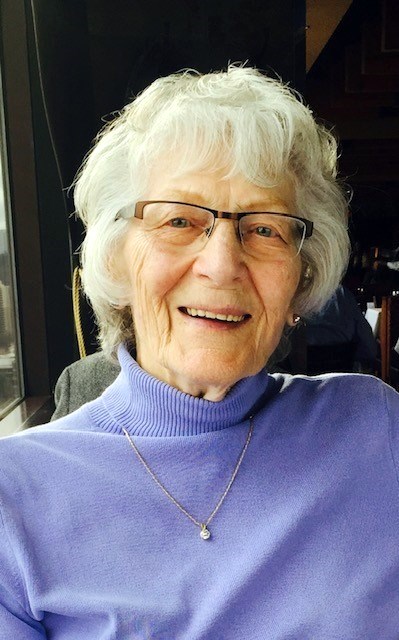 Marge was born December 18, 1925 in Los Angeles, California. Her parents were Anne (Godde) and Henry Weitzel. Marge’s father was a Los Angeles policeman. They lived in the LA area until her father retired and the family moved to Eugene, Oregon. Marge graduated from St. Mary’s High School in Eugene. Following high school graduation, she returned to LA to work in an aircraft factory in support of World War II. Following the war, she returned to Eugene where she worked for Greyhound bus lines. It was at Greyhound that she met her future husband, Bob. They married on November 1, 1948, and were married until his passing in December 2005. Bob and Marge had two daughters, Sandy and Pat, joining Bob’s daughter, Sharon (Kageler) Speidel. Bob and Marge lived in several towns while their family was young, but returned to the Portland and Gresham area in 1960 to raise their family. Bob remained at Greyhound until his retirement, and Marge worked for the Bonneville Power Administration until her retirement. Marge is survived by her daughter Sandy Smith (Bob) of Bend, grandchildren, Stacey Speidel, Mike Speidel (Raechelle) and three great grandchildren. She is also survived by her siblings, Irene Miller, Verl (Marilyn) Weitzel, and Lois (Bob) Emswiler. She is predeceased by her husband, daughters Pat and Sharon, siblings Dick, Norman, and Cecilia Anne. Bob and Marge moved to Arizona for a number of years prior to moving to Vancouver, Washington in 2002. Marge moved to Bend in 2016 with her daughter, Sandy and son in law, Bob. Bob and Marge enjoyed traveling the west visiting friends and family. Marge was an excellent hostess, friend, and generous to all. In lieu of flowers, remembrances may be made to the charity of your choice. A funeral service for Margaret will be held Tuesday, October 11, 2022 from 1:00 PM to 1:45 PM at Skyline Memorial Gardens Funeral Home, 4101 NW Skyline Blvd., Portland, OR 97229, followed by a reception from 1:30 PM to 3:00 PM. Fond memories and expressions of sympathy may be shared at www.skylinememorialgardens.com for the Kageler family.
See more See Less

In Memory Of Margaret Mary Kageler