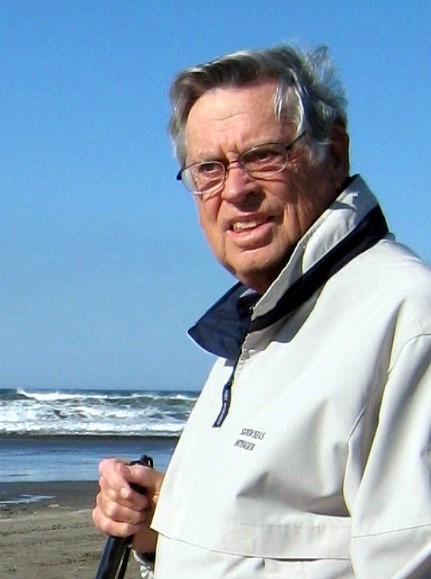 Long time Beaverton business owner, Don McCollum, passed away March 20, 2022, age 91. Don was born in Akron, Ohio, and attended Miami University (BS) and Indiana University (MBA). Don moved to Beaverton in 1963 to join Meier and Frank Company as a merchandiser. After a few years the company was sold and Don elected to start his own business. There were two divisions: Action Alley, teenage girls clothing, and Sue Marshall, ladies clothing. They opened their first store in Valley Plaza in Beaverton. The company grew to 24 stores located from Medford to Seattle. Along the way, they developed a distribution warehouse in Beaverton. The day Don retired he reluctantly accepted a three day job covering for a sick instructor. That three days led to a full-time, 17-year teaching assignment in the Portland Community College business department. When he retired from teaching he joined the travel business and led planned tours to many different countries. As the travel business changed it moved from land tours to cruises and Don went right along with them, regularly visiting every continent in the world except Antartica which was too cold for him. Throughout the years, Don served on positions with the Beaverton School District and the city of Beaverton. Don and his late wife Betty were founding members of Portland Community Church. He is survived by three sons, Todd, Jeff and Scott; five grandchildren and one great-grandchild. At Don’s request there will be a private memorial service for family only. In lieu of flowers, if you wish to give a memorial donation please consider the Talking Book and Braille Library of Oregon at givetotalkingbooks.org or by mailing a check to 250 Winter St. NE, Salem OR, 97301
See more See Less

In Memory Of Marshall Donald McCollum