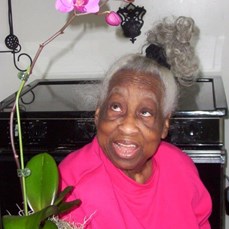 Ninety-six years ago, on April 2, 1917, in Clarksville, Texas,Rosa Mae Tucker was born to Millie Ivory Sims- and Clint Tucker She was their only child. \With just she and her mother, they relocated to Dallas where later she met and married Marvin Lucious Durrow...the paper boy. She was 16. They had three adorable children: sons Marvin “Maurice” , Charles Edward “chuck” and daughter,Loretta, who now is the only surviving sibling. In 1949 She chose to move with her children and join her mother Millie who had moved to Portland, Oregon for better work. Her husband left for Chicago for better work as a postman. They later divorced. Because she was now a single Black mother of three, she was repeatedly turn down for a home loan in the 50's and the one home that she landed was the biggest on the block. Rosa's great grandparents were Virginia, Tennessee, Alabama and Texas folks born into slavery. In 1863, a great grandfather who changed his slave name to Dred Tucker joined the U S Colored troops for his freedom . He fought for the Union . At the end of the civil war he joined the Buffalo Soldiers in Texas. He is buried at a military cemetery in Washington DC. A great grandmother Anna Eliza Jefferson, born into slavery in Virginia, later became a nurse to Brigadier General John Bullis who headed the Black Seminole Scouts in Texas. Rosa, now Rosemary, like her great grandmother, Anna, trained as a practical nurse. She loved helping people. She was kind, soft spoken , loving and giving. She always said she could “even get along with the devil”. Her passion was sewing, collecting antiques and gathering everything and anything she thought someone could use, might want, might need, and she put it away until they wanted it. A lot of it was stashed in the attic of her beautiful home where it is currently gathering dust and value. Her church family of 60 years is at Vancouver Avenue First Baptist Church in Portland where she sang as a soprano with the Senior Choir. Some of Her favorite songs: How great Thou Art (sung by her), Ava Maria (sung by her son Marvin) and I will never fall in love again by Tom Jones. Favorite sport: Going to the dog and horse races...playing dominoes...going to the Goodwill where she volunteered for years. Favorite food sweet potatoes (which is a staple food of the Tikar Tribe ) found that out after her African Ancestry DNA test. She shares maternal genetic ancestry with the Tikar people living in the Cameroon. We now know sweet potatoes are in her DNA. Favorite alcoholic drink: Strawberry margarita. She was blessed to travel to far away places such as europe, mexico, asia, and hawaii. Rosemary was also blessed with 7 grandchildren Todd (deceased) Michael, Christopher, Timm, Heidi, Jeni, Mark and 10 adorable great grandchildren:Grant, Ryan , Natalie, Jada, Jordon,.Jamison.,.Jalin. another Jordan, Morgan, Logan and step grandaughter Marsha. Best buddies Beryl ,Queen Ann Deloney ,and Mrs Broadous. Rosa Mae, Rosemary,Mom, Mother,Rosie ,Grandma Rose, Grannie, Grandmother, Great-Grandmother and friend, you are loved and will truly be missed. Private family service at Skyline Memorial Gardens at 1 pm Wednesday. The ceremony will be overseen by Pastor J.W. Matt Hennessee. Omar Shabazz of Portland Muslim Community Center will also be present to offer words of comfort and support. Instead of flowers, please donate to her favorite charity ...The Goodwill... now go shopping!!
See more See Less

In Memory Of Rosemary Durrow