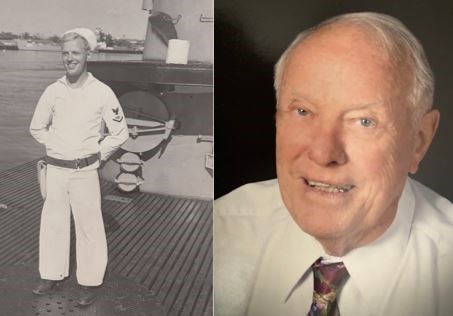 Stanley Robert Wells Clayville was born in Portland, Oregon on October 25, 1929 to George and Bertha Clayville. He attended Washington High School and then joined the Navy after graduation.

He served as a radio operator on submarines during the Korean Conflict. He then went on to serve for 22 years in the Army Reserves in the 451st Civil Affairs Group; earning a rank of Sergeant First Class. Stan worked for the US Postal Service as an electronics technician and later went on to work as a bookkeeper at a real estate company.

In 1965, Stan attended community college, where he was introduced to Marie Allen. The two quickly fell for each other and married soon after. Family meant everything to Stan and his family loved him. He was a kind, gentle soul; adored by his children and grandchildren.

Church was also very important to Stan. He was a long-time member of Montavilla United Methodist Church and enjoyed Bible Study very much; during his attendance with Marie, and even during his time in his retirement community.

Stan and his family enjoyed many camping trips. He and Marie loved to fish on these trips and enjoyed going to Pacific City most of all. They also loved to travel to more exotic places, often with his sister June joining them. Stan went all around Europe and even visited Hong Kong. One year, Stan and Marie joined Michael and his family and friends on a trip to Germany during Oktoberfest.

He was preceded in death by his parents: George and Bertha; his wife, Marie; his daughters: Terry and Vicky and his sister, Cathleen June. He is survived by his sons: Michael and Daniel; grandchildren: Keith, Kristen, Zachary, Stephanie, Derek, Dylan and Nicholas; great-grandchildren: Jason, Evelyn, and Zoey.