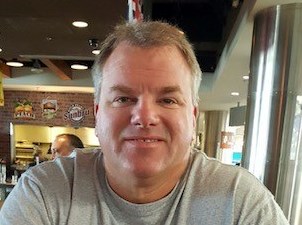 Mr. Christopher R. Donah passed away suddenly at his residence on September 14th in the village of Potsdam. A funeral service will be held on Friday at 1pm at the Stables at Windy Point on the Sissonville Road in Potsdam, NY with Rev. Robert Schirmer celebrant. Friends may call at the Stables from 10 am until the time of service at 1pm. Burial will follow the service at the Bayside Cemetery in Potsdam, NY. Thoughts, memories and prayers for the Donah family can be sent to @garnerfh.com. Chris is survived by his wife Angela Donah; sisters Robin Donah and Patricia (Rick) Clary; Uncle Don (Jeanne) Donah, Aunt Dorothy MacArthur, Aunt Cathy (Joe) Pillar and several nieces and nephews. He is predeceased by his parents and his uncle Lee Donah. Chris was born on September 27, 1966 in Potsdam, NY to the late Robert and Sally Storie Donah. He was a 1984 graduate of Potsdam Central High School. While in school Chris was a phenomenal baseball player and received several awards over the years. Chris went to Onondaga Community College and then transferred to South Carolina at Aiken. He played baseball in college also. Chris then attended Ithaca College where he received his master’s degree in sports medicine. While there he participated in the graduate assistant’s program. Chris began his teaching career at St. Lawrence Lewis Boces. For over 10 years he traveled a 100 mile loop every day and he loved every minute of it. He went from Harrisville to Gouverneur to Hermon Dekalb Central Schools every day. He then moved on to Potsdam Central School and taught in the AAK Middle School for years. He had currently been transferred to the High School. Chris has been the Potsdam Varsity Baseball coach for several years. His teams have been very successful. He was very proud of his teams and all of their accomplishments over the years. Please consider a donation to the baseball team. In lieu of flowers the family invites you to donate in Chris’s memory to the Potsdam Booster Club @ P.O. Box 806, Potsdam, NY 13676-0806 to help out his baseball team or to the Suicide Prevention OMH @ 44 Holland Avenue, Albany, NY 12229 to help someone in need. One of Chris’s biggest wishes was to get the team a new field. Chris was an avid Boston Red Sox fan and enjoyed golfing with his friends and family. Over the years, Chris was a consultant and was passionate about his involvement with “The Curse of Oak Island” on the History Channel. He was a fun loving husband, coach, colleague and friend and will surely be missed. Sent from my iPhone
See more See Less

In Memory Of Christopher R. Donah