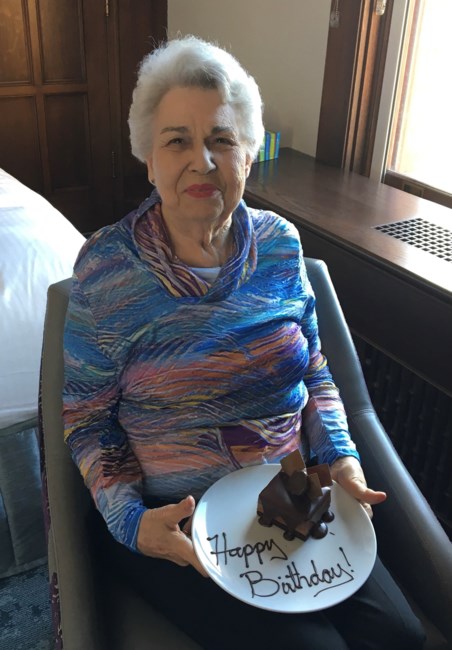 Barbara Elaine May Fullerton March 3, 1933 to May 25, 2021 It is with much sadness that we announce the passing of Barbara Elaine May Fullerton (formerly MacDonald, nee Middleton) on May 25, 2021, in Prince George, BC. (formerly of Nanaimo and Qualicum Beach, BC) at the age of 88. Barb was predeceased by her loving husband, Don Fullerton, her cousin, Mary, her brother-in-law John, and her grandson Todd. She is survived by her sister, Sheila, cousins Andrew, Barbara and Margaret, daughters Elaine and Kathy (Randy). She is also survived by her step-children, Patti, Dave and Jim, her niece Joanne and nephew Michael, grandchildren, and great grandchildren. Barb was born in Vancouver, BC, to parents George Frederick Victor (Fred) Middleton and Elaine Mary Middleton (nee Jackson). She moved to Kamloops, BC as a young child before moving to many communities throughout western Canada and Ontario with her father’s career at CN Rail, eventually being stationed in Sioux Lookout, Ontario, where she married her first husband, Don MacDonald. Barb and her daughters spent time in Kamloops, Prince George, many communities in the lower mainland, Nanaimo and the Yukon during her 40+ years of service with the Royal Bank of Canada. Upon her retirement Barb moved to Qualicum Beach, BC where she took pleasure in her involvement in the United Church of Canada, making many friends. Known as “Nana” to her great grandchildren, she was larger than life and never missed an opportunity to show them how to be the best version of themselves. At once stately and proper, Nana was still able to poke fun at herself. Whether flipping pancakes over the camp stove, digging toes in the sand at Shuswap Lake, or managing overcrowded, loud Easter suppers, Nana, always strove for propriety in the constant chaos that she secretly adored. The family would like to extend their gratitude to the staff at Lakeside Gardens in Nanaimo for their support and kindness to Mom and Don during their time in Nanaimo. We would also like to thank Drs. Mader and Desrosiers, and to the wonderful staff at Two Rivers Seniors Lodge, for their care of Mom during her last months in Prince George. A private service will be held at a later date.
See more See Less

In Memory Of Barbara Elaine May Fullerton