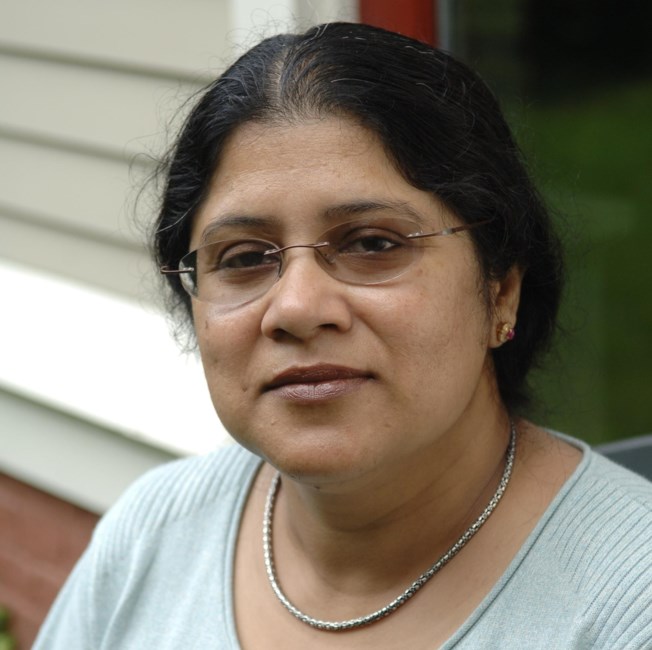 Meenakshi Narain, age 59, passed away on January 1, 2023. Meenakshi was the wife of Ulrich Heintz for 34 years, mother of Aneesh and Anand, and sister of Rahul, Gauri, Prasant, and Mamta. She was born in Gorakhpur, India to Prem Narain Srivastav and Kusum Srivastav. Meenakshi was a prominent high energy experimental physicist, who was most recently a Professor in the Brown University Physics Department. Meenakshi joined Brown as a faculty member in 2007 after spending nine years at Boston University. She had served as Department Chair since July 1, 2022. She was the first woman to serve in this role. Meenakshi holds a PhD degree in physics from the State University of New York at Stony Brook, where she conducted her research on the CUSB experiment about Upsilon spectroscopy. She received an M.Sc. degree in Physics from IIT, Kanpur and was awarded the General Proficiency Prize for Best Outgoing Student in M.Sc. Physics. In 2020, she was awarded the IITK distinguished alumnus award. Meenakshi completed her B.Sc. degree from Gorakhpur University and was conferred the University Gold Medal on behalf of Prime Minister Indira Gandhi. As an experimentalist, Meenakshi dedicated her career to understanding elementary particles and their interactions in an environment similar to the early universe. She spearheaded a multidisciplinary effort to bring advanced quantum sensing and quantum computing techniques to high energy physics. As a postdoc with the DØ experiment at Fermilab, she was instrumental in the discovery of the top quark in 1995, which is the most massive known elementary particle. Following this discovery, she was awarded the prestigious Wilson Fellowship at Fermilab. Meenakshi was deeply involved with the Compact Muon Solenoid (CMS) experiment at the Large Hadron Collider (LHC) at CERN in Geneva, Switzerland. She made many significant contributions to the CMS experiment in physics analysis, detector operations, and detector upgrades. She was a member of the CMS Management Board as the United States regional representative. She was a leader of the CMS group from Brown University. She was a founding chair of the CMS Diversity Office and a leader of the CMS Women’s Forum. She was also a leader in the U.S. CMS Tracker Upgrade Project. In a statement, the U.S. CMS leadership group noted, "her impact on CMS has been immeasurable and her many contributions have been critical to the success of the collaboration.” In 2012, Meenakshi’s group had significant involvement in the discovery of the Higgs Boson. In 2018, she made history as the first woman elected to be Chair of the U.S. CMS Collaboration Board. Meenakshi was an author or co-author on over 850 peer-reviewed articles in leading physics journals, was a TEDx speaker, gave numerous public lectures, and appeared as an invited speaker at major conferences around the world. Meenakshi received numerous awards and accolades for her work. In 2000, she received an Outstanding Junior Investigator Award from the U.S. Department of Energy (DOE) and a National Science Foundation Faculty Early Career Development Award. She was elected a Fellow of the American Physical Society in 2007. In 2012, she was a Fellow of the LHC Physics Center at Fermilab and she served as Coordinator from 2013-2016, promoting collaboration with colleagues from South America, Europe, Asia. From 2020 to 2022, she co-led the activities of the “Energy Frontier” for the APS/DPF Community Planning Exercise to develop a 20-year future vision for particle physics research in the US. She served on the High Energy Physics Advisory Panel (HEPAP) of the U.S. Department of Energy and she was just chosen as a member of HEPAP’s P5 subpanel, which will advise the federal government on priorities for the field. Meenakshi was a strong and persistent advocate for diversity and inclusion in Physics. She served as a member of the CMS Task Force on Diversity and Inclusion and engaged in STEM outreach activities to encourage the participation of young women in science. She was heading the organization of the Conference for Undergraduate Women in Physics (CUWiP) at Brown in January 2023. She was the founding chair of the Diversity Committee of the CMS experiment. She was an informal mentor and faculty advisor of the Department of Physics Women in Science and Engineering (WiSE) group and served on the University GWiSE Advisory Committee. Meenakshi had been actively engaged in numerous STEM outreach activities, promoting the appreciation of science to the public. In 2018 and 2019, she organized a program to combine STEM activities with art and design, called the Big Bang Science Fair at “WaterFire Providence.” As an affiliate faculty in the Brown University Data Science Initiative and the chair of the Campus Advisory Board, together with her group, she actively participated in CS4RI, a Rhode Island state initiative for promoting Data Science in high schools. https://www.forevermissed.com/meenakshi-narain/about
See more See Less

In Memory Of Meenakshi Narain