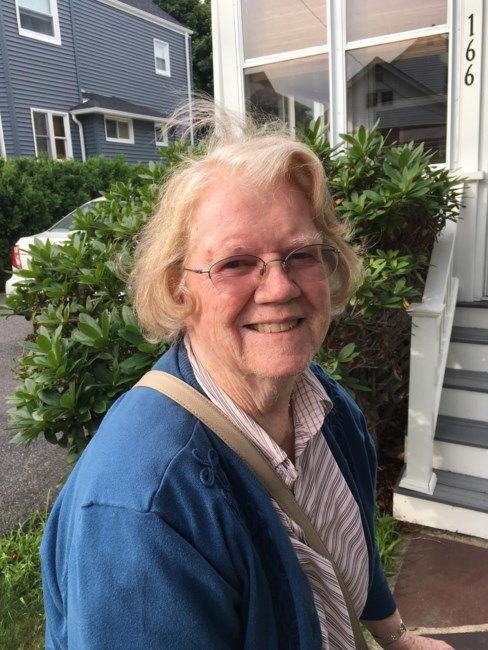 Ann K. (Gillis) Lynch of Milford and formerly of Quincy passed peacefully March 2, 2022 at Countryside Health Care-Milford from complications of Alzheimer’s disease. She was 90. Born in Brookline, MA to the late Annabelle and Thomas Gillis, she was raised on O’ Callaghan Way in South Boston. She graduated from the Dorchester High for Girls in 1949 and Boston Clerical in 1951. She was married to the late John F Lynch also of O’Callaghan Way for 45 years until his death in 1998. They settled in Wollaston where she lived for 65 years. Ann worked at the Navy Building, Howard Johnson’s, Liberty Mutual and Stop&Shop in Quincy in the corporate offices. Music and singing were an important part of her life. As a child, her father trained her and her two sisters to sing harmony and formed the Gillis Girls. The Gillis Girls sang on WEEI radio in 1942 and performed with a vaudeville act by Eddie Lyons to various audiences including hospitalized veterans. The Gillis Girls performed on the Boston Common to raise money for war bonds during WWII. She enjoyed playing piano and sing-a-longs and could harmonize just about anything. She was an active member at the South Shore YMCA and faithful participant in Linda’s exercise class for many years. She enjoyed many trips with the “Live Yers” and was an officer for NARFE. With her husband John she greatly enjoyed biking along the Cape Cod Canal and the East Bay Bike Path which was topped off with a PB&J sandwich and thermos of milk. They also enjoyed time walking around Castle Island followed by a hot dog from Sully’s. She enjoyed her weekly quilting classes taught by Lois at Saftlers in Whitman, MA and produced many a cherished quilt. Her quilts were always a big hit at a family wedding or baby shower. When not quilting or reading a courtroom drama, she enjoyed watching Downton Abby, Judge Judy and Blue Bloods. She is best known for her smile which endeared her to all she met. She is survived by son John Lynch (Mary) of Weymouth, Maryann Lynch of Milton, Vermont, Maureen Allen (Bill) of Hopkinton, grandchildren Christine Zent of Weymouth, Brian Lynch of Hingham and Justin Thorpe of Milton, Vermont, great grandchildren Meghan, Allison and Lily. She also is survived by her dear sisters Jean Scholl of Tewksbury MA and Joan Owens of Plymouth MA, a brother Thomas Gillis of Bangor, Maine, her niece Deb and nephews Billy, Tommy, and Kevin. She is predeceased by her sister Mary and niece Barbara. Her family greatly appreciates the kindness and warm care at Whitcomb House, Cornerstone Canton and Milford, Countryside Health Care and Compassionate Care Hospice. Family and friends are invited to celebrate her life at the Deware Funeral home 576 Hancock Street Quincy on Sunday March 13 from 1-5PM. A Mass will be held on Monday March 14 at St. Ann’s Church 757 Hancock Street, Quincy 10AM followed by burial at Knollwood Memorial Park in Canton. The family wishes to invite family and friends to lunch at Granite Links 100 Quarry Hill Drive Quincy. In lieu of flowers, donations may be made to the Alzheimer Association.
See more See Less

In Memory Of Ann K. Lynch