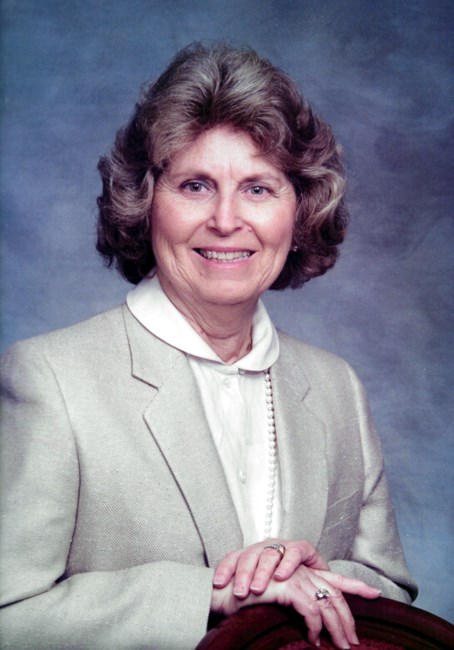 Agnes Esther Cochrane was born into a Presbyterian family on January 15, 1925 in Laurel Hill, North Carolina. After a short illness, she died peacefully in her sleep at her home on Wednesday, September 28th, 2022. Her parents were Mary Crawford Hicklin and Robert Sharpe Cochrane. Being an offspring of a generation defined by WWI and the Great Depression and a member of another, often referred to as the “greatest”, she was a testament to the values and drive that defined those generations. She attended Laurel Hill Elementary School where her sixth grade teacher later recalled her as “the smartest student in the class”. She graduated from Laurinburg High School’s class of 1941. At the time, little did she know, her future husband was a classmate. She continued her education at The Woman’s College of The University of North Carolina where she graduated in 1947 cum laude with a major in Chemistry and a minor in Biology. After college she worked as a medical technologist at Scotland County Memorial Hospital (Airbase) and N.C Baptist Hospital. While working at Scotland County Memorial Hospital (Airbase), she worked with her former high school classmate Arthur Rogers Summerlin, Jr., M.D. and they became sweethearts. In 1949 soon after their marriage, Art was called to service in the Army Medical Corps, serving in Korea and Japan. After his overseas service, the now family of three moved to Chapel Hill where Art completed a residency in OB-GYN. In 1955 with the addition of twins, the family moved to Raleigh, where Art was a well-respected doctor for many years. His practice grew as well as their family. Agnes tended to her now five children with great love. Her love of children extended to her nieces and nephews and neighborhood friends and their children. In 1955, the Summerlin family became members of West Raleigh Presbyterian Church, where Agnes was an active member of the church. In 2010, she received the Presbyterian Women Honorary Life Membership. She was recognized for her “unflappable nature, a calmness of spirit, her deep faith, her keen mind, and her natural love for other people.” After her children grew older, Agnes worked professionally for many years as a Clinical Chemist with the North Carolina State Laboratory. This was a fulfilling career that promoted good health to all North Carolinians through programs which included detection of chronic and infectious disease. Her work directly supported the public health of North Carolinians, particularly in the field of childhood diseases. She mentored young people in her field of work. After retiring, she became the office manager in her husband’s practice. In addition to her parents, Agnes was predeceased by her husband; her son, William Mark Summerlin; her sister, Mary Lucille Cochrane Ledbetter; and her brother, Robert Sharpe Cochrane, Jr. She is survived by her children: Susan Glenn Summerlin Goodmon (Raymond), Rosemary Summerlin Crane (Jeffrey), Arthur Rogers Summerlin, III (Shoanette), and Stephen Cochrane Summerlin (Evelyn) and her grandchildren: Louis Fletcher Goodmon (Melissa), Leslie Caylin Spear (Josh), Harold Arthur Spear (Jess), Luke Ashton Perry (Laura), Laura Summerlin Vierkandt (Tim), Steve Summerlin, Hunter Summerlin, Kelly Welsh Summerlin, and William Matthew Summerlin. She was also blessed with numerous great grandchildren, who loved her dearly. In addition to her family, Agnes is survived by her beloved Robert L. McMillan, with whom she shared a special relationship. The family is grateful for Lina Oates and Bonita Randolph, and Transitions LifeCare for loving our mother and providing a comfortable ending to her wonderful and very fulfilling life. A memorial service will be held at West Raleigh Presbyterian Church on Wednesday, October 5th, at 2:00 p.m., 27 Horne Street, Raleigh, N.C. 27607. A reception will follow the service at the church. The service will be live streamed through the following link, https://youtu.be/P0JehUJXXC0. In lieu of flowers, memorial donations can be made in her honor to West Raleigh Presbyterian Church - Presbyterian Women, at https://www.westraleighpres.org/presbyterian-women. Arrangements by Brown-Wynne Funeral Home, 300 Saint Mary's St., Raleigh, NC. Fond memories and expressions of sympathy may be shared at www.brownwynneraleigh.com for the Summerlin family.
See more See Less

In Memory Of Agnes Cochrane Summerlin