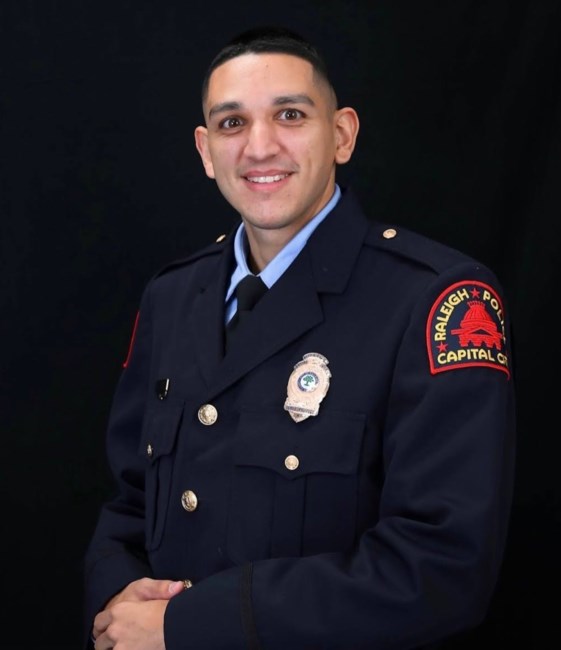 It is with a heavy heart that we announce the death of Gabriel Jesus Torres. Gabriel, 29, husband of Jasmin Torres, father of Layla Torres, died unexpectedly in front of their home on October 13, 2022. In his final moments he was surrounded by his wife, daughter, neighbors, as well as his brothers and sisters in blue and other emergency personnel from the great city of Raleigh. Gabriel Torres was born March 4, 1993, in Queens, NY to Carlos Torres and Maritza Cortes. He was raised in Jackson, NJ. At the age of 24, Gabriel enlisted and earned the title United States Marine. He was stationed at Camp Lejeune, NC. On June 2nd, 2018, at 25 years of age, Gabriel wed the love of his life, Jasmin. On August 25, 2020, he was blessed with a beautiful baby girl, Layla. After serving his country for a little over 4 years, Gabriel decided to continue his service to the public as a Raleigh Police Officer. Gabriel was a family man, a doting husband and the sweetest dad. When he wasn’t working, he would help his wife with dinner, run errands, parent his daughter, love on his dog, Benji, watch movies, and play his video games. He was a die hard New York Knicks and New York Jets fan, no matter the taunts that came with it. He was often used for his height by his wife who could not reach many things. He lived a very simplistic and loving life. Gabriel spoke of his love for Jesus and loved to sing along to worship songs. In addition to his wife of 4 years, and daughter of 2 years, Gabriel is survived by his father, Carlos Torres, his mother, Maritza Cortes, his brother, Joshua Torres, his sister, Gizel Torres, both sets of grandparents and numerous other family members. A funeral service was held on Saturday, October 22, 2022 at Cross Assembly Church. Following services in Raleigh, Gabriel will have a Mass of Christian Burial at St. Stephen's Catholic Church in Kearny, NJ, on Friday, October 28, 2022 at 11:00am. Burial will follow in Holy Cross Cemetery in N. Arlington, NJ. In lieu of flowers, please direct memorials to Law Enforcement United, benefiting the children of fallen officers. You may use the link below under 'donations'. If you would like to leave a favorite story / memory of Gabriel, or a message of condolence to his family, you may do so below within 'add a memory'.
See more See Less

In Memory Of Gabriel Jesus Torres