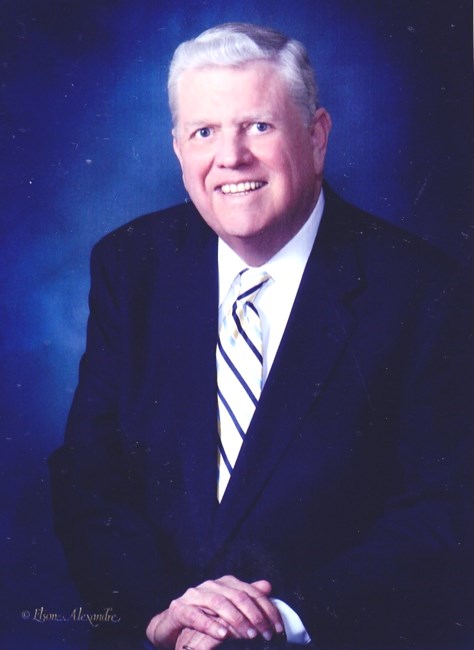 Gary Eldon Carlton of Raleigh passed away August 1, 2022. Gary was born in Kannapolis, North Carolina on July 27, 1940. He was preceded in death by his father, Eldon Carlton, and mother, Hazel. He is survived by his wife Janice Beer Carlton of Raleigh. Gary has three children, Mike and wife Kim of Cary, Mark and wife Laura of Raleigh, Judy and husband Scott Michael of Raleigh, and one step-daughter Pam Ferrell and husband Ebbie of Richburg, South Carolina. Gary was so proud of his four grandchildren: Christopher and wife Helen, Zachary and wife Barkley, Bradley Carlton, Jacob Michael, and one step-granddaughter, Ashley Craig. Gary has three beautiful great grandchildren: Caroline, Connor, and Wells. Mr. Carlton joined First Union National Bank in 1963 in Charlotte. He worked in several different cities including Raleigh prior to becoming Regional Manager in Lumberton, North Carolina until 1979. He then joined Southern National Bank and became President and Chief Operating Officer at Southern National Bank of South Carolina in 1987. In 1989 he was promoted to President and Chief Operating Officer of Southern National Bank of North Carolina and continued in that capacity until the merger with BB&T in 1995. He also served on the Southern National Corporation Board of Directors. After his banking career, Governor Hunt appointed Gary as Director of Business and Industry Development in the NC Department of Commerce. He worked in this position for three years until his retirement. Mr. Carlton was awarded The Order of the Long Leaf Pine by Governor Pat McCrory in 2015 for his many years of significant contributions to the state and its communities. Gary was a graduate of the University of North Carolina at Chapel Hill, the Stonier Graduate School of Banking at Rutgers University, and completed the UNC School of Banking and the Graduate Executive Management Program at Duke University. While Gary was focused on his education, career, and building business relationships, he found time to coach his sons in baseball, basketball, and football Little Leagues in Raleigh. Coaching became his lifestyle as he coached employees, children, and grandchildren. He truly evolved into a life coach for his family. Gary’s legacy of managing successful relationships in banking, business, commerce, and his personal life paved a path forward for all his children and precious grandchildren. He took great pride in mentoring his grandchildren with skills for a successful life and career. He served on numerous boards over the years including The NC Banker’s Association, the Babcock School of Management Board of Visitors of Wake Forest University, UNC Board of Visitors, and Pfeiffer College Board of Trustees. Gary was a member of Bay Leaf Baptist Church. He was proud to serve as a Trustee for four years and the Stewardship Committee for numerous years. In his personal time, Gary cherished his time at Cherry Grove beach. He enjoyed shagging and beach music. He enjoyed the game of golf and was an avid golf fan watching every tournament with great excitement. He passionately followed UNC basketball and football. He attended all home games for many, many years. Gary was and always will be a TAR HEEL. Mr. Carlton never met a stranger and could build a relationship with all walks of life. He had a natural gift to relate to the least and the greatest. Whether in business or his personal life, he loved to converse and take time to learn about the person beside him or in front of him. He was a gentle giant full of compassion and care for everyone he met. He was larger than life with his wisdom and experience. He was the rock of the family and built a family which became his greatest source of pride. In his last days, he often commented, “I am so blessed” referring to his family. Whether you knew him as Husband, Dad, Grandad, Paw Paw, a friend, a business associate, or an acquaintance, he made a lasting impression and impact that will never be forgotten. Family will receive friends on Saturday, August 6, 2022 from 12 Noon until 1:30 pm at Bay Leaf Baptist Church. Funeral Services will begin at 2:00 pm at church, with entombment to follow at Raleigh Memorial Park Mausoleum. (For those unable to attend, a link to the church's live stream of the service will be added closer to the day of service.) In lieu of flowers please consider a donation to Bay Leaf Church Building Fund at 12200 Bayleaf Church Road, Raleigh, NC 27614.
See more See Less

In Memory Of Gary Eldon Carlton