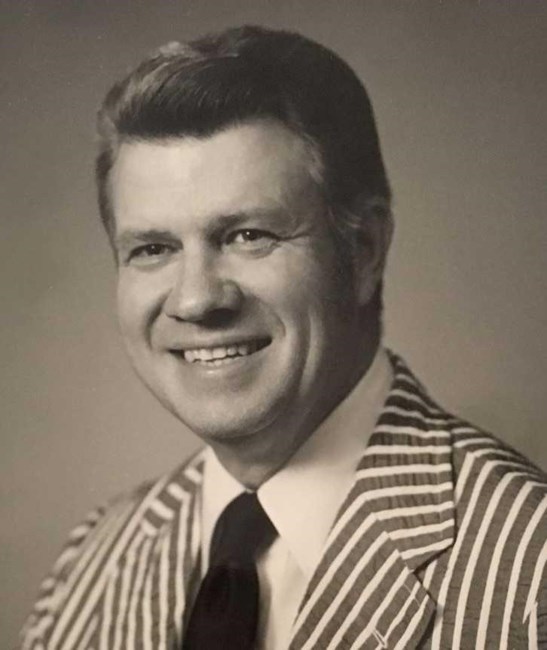 Harry Eugene Stewart died peacefully at home surrounded by his children on October 22, 2018. Harry was born on October 17, 1918 in Washington, N.C. to Harry Eugene Stewart and Mary Washington Blount. He was blessed with a wonderful wife and loving, supportive children. Harry is survived by his four children and their spouses; Harry Eugene Stewart III (Gail), Mary Washington Blount Stewart Cohn (Cass), Laurence Kerr Stewart Pelto (Monty), and Nancy Haywood Stewart Pezdek. He is also survived by his grandchildren and their spouses: Eliza Rachel Cohn, Cecelia Teresa Pezdek (Tavo), Rebecca Blount Pezdek, Lydia Kerr Pelto Binanay (Jon), Jorma Blount Pelto, Stewart Arthur Pelto (Kristen), Harry Winchester Stewart, Tracy Beth Cohn Miketa, Alyson Meta Cohn (Larry), and Leslie Caryn Cohn. He is survived by eleven great-grandchildren. Harry was predeceased by his wife, Teresa Sapulos Stewart, whom he married on September 28, 1940 in Raleigh, N.C. She died on August 20, 2012. He was also predeceased by his four younger brothers; William Augustus Blount Stewart, John Lyon Stewart, Nathaniel Haywood Stewart, and Donald Edwin Stewart. After graduating from the Catholic Orphanage, known as Nazareth, in Raleigh he was employed at Wachovia Bank from 1937-1943. He then was the Director of the Dining Halls at N.C. State from 1944-1957. He was the Executive Director of the N.C. State Wolfpack Club from 1952-1958. From 1958-1968, he was the Regional Director of Occidental Life Insurance Company. He was the President of Andy Griffith Products from 1969-1974, Chairman of the Board of Certified Planning Consultants from 1975-1976, and President of Harry Stewart & Associates. Harry was also active in the civic and professional life of Raleigh serving as President of the Young Men’s Club, The Tip-Off Club, The Washington Club, Raleigh Kiwanis Club, Hoover Syndicate, Stag Club, President of the N.C. Jaycees, Vice-President of the U.S. Jaycees, Treasurer of the U.S. Jaycees and Lt. Governor of Kiwanis. He was Raleigh’s Outstanding Young Man in 1947 and 1952, Tarheel of the Week in 1952, and North Carolina’s Outstanding Young Man in 1947. He was Chairman of the Board of Edwards & Broughton Printing Company and of the Wake County Schools System when Wake Tech was built. Harry enjoyed an active life with many friends he made through his work and play. His favorite past times were tennis, golf, gin rummy, reading, traveling and vacationing with his family at the beach. He enjoyed spending time with his friends at The Good Old Boys, Old Raleigh Boys, The Sphinx Club, Stag Club, Kiwanis Club and the Carolina Country Club. The family wishes to give special thanks to Sheral Hackney, Bonita Randolph and Stefan Beittel for their untiring and respectful care of their father. A celebration of life will be held at 1:00 pm on Saturday, November 3, 2018 at Christ Church, 120 E. Edenton Street, Raleigh, N.C. The family will receive friends following the service in the Parish Hall at Christ Church. A private interment for the family will take place at Historic Oakwood Cemetery after the service. Arrangements by Brown-Wynne Funeral Home, 300 St. Mary’s Street, Raleigh, N.C.
See more See Less

Memorial Service followed by a reception at the church