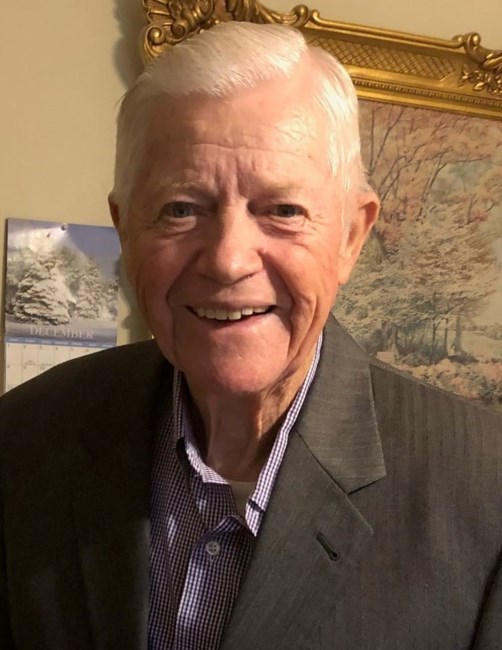 Mr. Johnny Powell Blake, husband of Peggy C. Blake, went to his eternal home to be with the Lord on August 3, 2022, after a courageous fight with Cancer at Duke University Hospital in Durham, NC. Mr. Blake was born July 10, 1934 in Wake County to the late Lula Josephine Langdon and Flintrell Laurel Blake, Jr. Johnny was educated in the Wake County schools, and upon graduating, was employed with Crabtree Quarry for several years before being employed with Corning Glass Works, retiring from AVX after 45 years of dedicated service. Johnny was a founding member of Bethel Christian Center Ministry, he ministered to others for over 60 years, bringing many to Christ. He enjoyed his time fishing and spending quality time with his children and grandchildren. Johnny never met a stranger and never missed an opportunity to witness to bring others to Christ. What gave him the most happiness was holding his wife's hand of 68 years. In addition to his wife, Johnny is survived by his children, Dr. Michelle Gillespie, and her husband, David, of Lubbock, TX, Charles Timothy Blake, and his wife, Darlene, of Raleigh, NC., Kenny Blake of Durham, NC; fifteen grandchildren; ten great grandchildren; and numerous nieces, nephews, and cousins. Besides his parents, he was preceded in death by his son, Donald Blake, his daughter-in-law, Jamie Blake and was the last surviving member of a large loving family. He was also preceded in death by his sisters, Sarah, Bessie, Rachel, Josephine; and his brothers, Jessie, Carl “Jet”, Ollie, and James “Jimmy”. A funeral service was held on Monday, August 8, 2022 at 2:00pm in the Bethel Christian Center, Durham, NC. Officiating was Rev. Don Westbrook. Burial followed in Raleigh Memorial Park on Glenwood Ave in Raleigh, NC. If you would like to leave a favorite memory / story of Johnny or a message of condolence to Peggy and the Blake Family, you may do so below within "add a memory".
See more See Less

In Memory Of Johnny Powell Blake