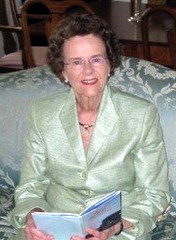 With her daughter, Kathy and son-in law Lee by her bedside, Katherine passed away from this earth and breathed her first heavenly breath on Monday, January 23rd. Residing in Mount Pleasant, SC Katherine, better known as Kitty was 97 years old. Kitty was born April 29, 1925 in Belhaven, North Carolina to Nathaniel and Agnes Winfield. She was one of seven children. She is survived by her daughter, Kathy and husband E. Lee Stokes, III, three grandchildren: Laura Turner and husband Chris, Katie Dorhman and husband Kent, Roy Fuller IV, and by five great grandchildren: Quinn and Olivia Dohrman and Charlie, Finn and Jack Turner. She was pre-deceased by her husband, Roy E. Fuller, Jr. and son, Roy Edwin Fuller, III. Kitty graduated from Belhaven high school and attended UNC Greensboro. After college she moved to Raleigh where she met her husband, and life-long partner, Roy. After nine months of courtship, they married and shortly after had their first child Edwin. Two years later they welcomed their second child, Kathy. In 1953 they moved to Norfolk, Virginia where they spent the next 35 years raising their family. Kitty jumped right in and became involved in her church, Talbot Park Baptist and also the City of Norfolk Garden Club. Growing up in the country, she loved working outdoors in her yard. She delighted in sharing plant cuttings with her friends and neighbors. She was president of Talbot Park and Princess Anne Hills Garden Clubs. In 1982, they moved back to Raleigh to be close to their daughter and grandchild Laura. They joined Hayes Barton Baptist where Roy grew up as a child. Kitty had boundless energy and was blessed with many talents. She sewed beautifully and made costumes for her children at Halloween as well as ultra suede suits and coats. She loved to dance, enjoyed knitting, flower arranging, playing bridge and making Christmas ornaments for her many trees. When she heard the news of grandchildren on the way, she learned how to smock and made beautiful dresses, bonnets, and outfits for all of the grands. She was an outstanding cook and entertained in her home with ease. Kitty truly had a servant’s heart, always doing for others. She was the first to show up at someone’s door with a home-cooked meal. Each time she moved into a new neighborhood, she was always quick to find those who had a need...a lonely widow or widower, someone wounded from a divorce, or an elderly person who needed some extra attention. A dedicated wife, mother, grandmother and friend, she will be greatly missed by all who knew her. The family would like to thank the caregivers at Somerby Retirement Community who helped care for her the last five years. Special gratitude and heartfelt thanks especially go to Crystal Mitchell and Paulette Wright who faithfully took extra special care of “Miss Kitty.” A celebration of life service will be held in Raleigh, NC at Hayes Barton Baptist Church at 11:00 am Saturday, January 28th followed by a visitation at the church. In lieu of flowers, contributions can be made to Hayes Barton Baptist Church 1800 Glenwood Avenue, Raleigh, NC 27608. Arrangements are under the care of Brown Wynne Funeral Home 300 Saint Mary’s Street, Raleigh, NC 25605.
See more See Less

In Memory Of Katherine Winfield Fuller