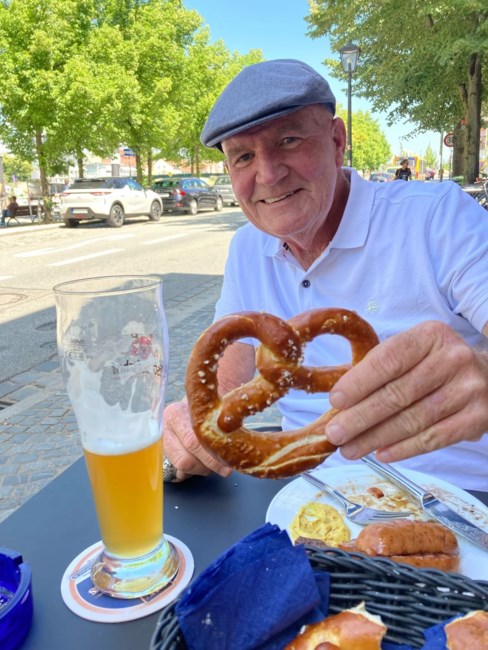 Kevin George Glennon of Carolina Shores, NC, age 70, died peacefully Friday, September 16, 2022, surrounded by his loving family. Kevin was born in Rockville Centre, NY on May 5, 1952, son of the late John Lawrence and Nora Rose (Fredrick) Glennon. He grew up in Levittown, New York, and graduated from Brooklyn Preparatory High School in 1970. He attended Manhattan College, earning his bachelor’s degree in Business and was also a member of the Manhattan football team. Upon graduation, Kevin embarked on a successful four-decade career as a senior sales executive. Kevin's career took him and his family across the US to New Jersey, Kansas, Illinois, Missouri, Texas, and North Carolina. In his retirement, Kevin settled with his wife in Sunset Beach and most recently Carolina Shores, North Carolina. Everyone who knew Kevin felt his big heart and his zealous way of living life to the fullest. In his retirement, he enjoyed relaxing at the beach, connecting with friends at the Elks lodge, and traveling the world with his wife, Pat. Kevin was an avid and talented golfer hitting the links every week for years and joining several golf leagues – too many to name. He will be missed especially by his seven grandchildren, with whom he spent countless hours swing- and stroller-pushing, playing golf (putt-putt and full course), Mexican train, boogie boarding, swimming, and numerous other activities. He was a huge fan of the New York Yankees and Giants. Kevin is survived by his wife of 48-years, Pat, his two daughters, Kerri Eklund of Cary, NC (husband, Mike) and Danielle Gilbert of New York, NY (husband, Greg), his grandchildren Kaitlyn Eklund, Alyssa Eklund, Lauren Eklund, Tyler Eklund, Rex Gilbert, Avery Gilbert, and Mia Gilbert, his Glennon siblings, Jack Glennon, Bryan Glennon, Mary Worth, Michael Glennon, Betty Boehm, Timmy Glennon, Nora Lissy, Danny Glennon, Susan Rao, and PJ Brown and their spouses, as well as several cousins, nieces, and nephews. Kevin was preceded in death by his parents, his brother Dennis Glennon, and countless other loved ones. A mass will be held for Kevin at St. Brendan's Catholic Church in Shallotte, NC on Friday, October 21 at 10am. A celebration of life will be held in Kevin's honor on Saturday, October 22nd at the Elks Lodge in Calabash, NC. Kevin's friends and family will gather to share their favorite Kevin memories. The family would like to thank the Heart & Vascular ICU, Neurology ICU and Palliative Care teams at UNC REX Hospital in Raleigh for their compassionate care during Kevin’s extensive stay. They'd also like to thank all family and friends for their support and prayers. In lieu of flowers, the family suggests donations to The Tunnel to Towers Foundation (tnt.org), a charity Kevin was an avid contributor. To leave a message of condolence for the Glennon family, or a fond memory of Kevin, you may do so within "Add a Memory".
See more See Less

In Memory Of Kevin George Glennon

A Mass of Resurrection