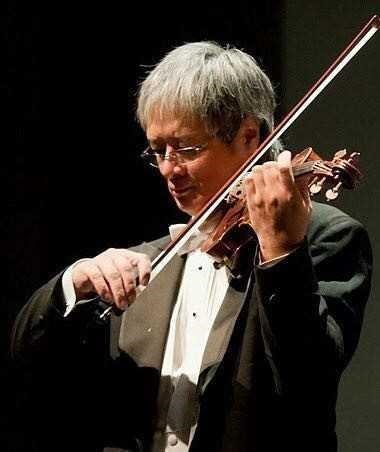 Yang Xi was born February 1, 1963 and passed away peacefully Friday, April 12, 2019 at Transitions LifeCare, following a valiant, year-long battle with colon cancer. Yang grew up in a legendary musical family in Chengdu, China. His father, Tonliu Yang, was a conductor, violinist, and a music educator. His mother, Wenzeo Chen, was a well-known pianist in China who relocated to the States and currently teaches in Atlanta, GA. Yang began his musical journey at the age of 7 when his father bought him a half size violin. By the age of 10, he began to perform live on television and over radio stations. He made an average of 200 solo performances a year between the ages of 12 to 14. At 15, he won a highly competitive national audition to enter the prestigious Central Conservatory of Music in Beijing, China. It was there that he studied in both the violin and viola performance programs. He had his first solo debut with the Beijing Philharmonic Orchestra after he won the National Violin Competition in Shanghai at the age of 16. Arriving in the United States by himself at age 20, Yang won a National Strings Competition in Indiana where his American sponsors lived. That competition launched opportunities for him to perform numerous solo recitals, chamber music concerts and also enabled him to give master classes to young string players from various public schools and colleges. Soon thereafter, he won a scholarship to study at the Indiana University School of Music, under the guidance of James Buswell, Nelli Shkolnikova, Josef Gingold and Rostislav Dubinsky. Later, Yang became the Principal Violist for the Florida Grand Opera, the Florida Philharmonic, and Symphony of the Americas. He performed with Pinchas Zukerman, Placido Domingo, Isaac Stern, Janos Starker, as well as Tony Bennett, Stevie Wonder, Michael Jackson, and for two US Presidents. Recently, he was appointed as one of the judges for the YangTong Liu International Violin Competition in China. As a soloist, he performed with the Carolina Philharmonic, the China National Orchestra, the Beijing Philharmonic, the Sichuan Philharmonic, the Raleigh Symphony Orchestra, the Durham Symphony Orchestra, and the Arkansas Symphony Orchestra. He was a guest violist performing with the world class Shanghai Quartet in NC and XiAn, China. He served as the concertmaster of the Raleigh Symphony Orchestra, Principal Violist of the Carolina Philharmonic, and Artistic Director of the Carolina International Orchestra of NC. Yang Xi loved performing, teaching, coaching chamber music,and conducting. He was a bigger than life powerhouse! Locally, he inspired many young string players through his vibrant private teaching at home, at Meredith College, the Dryer School of Music, and coaching chamber music at the Lamar Stringfield Music Camp. He was not only an extraordinary teacher, but a beloved role model. He was the sort to work super hard and never to hold back. It’s no wonder that he taught his students to do the same. They loved him and the feeling was mutual. When Yang was not teaching or performing, he enjoyed cooking, riding his motorcycle, photography, traveling, RV-ing, birdwatching, youtubing, and delving into all kinds of technology. He has been described by his friends as “a bigger than life, humble, musical genius.” He was driven, fun, goofy at times, witty, incredibly resourceful, generous to a fault, and compassionate. He accomplished a lot during his brief 56 years, and left an indelible mark on his family, friends, students, and audiences. He was preceded in death by his father, Tonliu Yang, and very special friend, violinist Izabela Spiewak. Yang is survived by his devoted fiancée, Jenny Zhou, his sons Benjamin and Joshua of Ft. Lauderdale and their mother Martha Schimelpfenig; his mother, Wenzeo Chen from Atlanta, and a brother, Yang Que from Atlanta. The family wishes to thank all the medical professionals, friends, and students who supported him throughout his life and illness. Heartfelt gratitude goes to Nancy Gerst, Irene Burke, Nelle Keeley, Deanne Renshaw, as well as Linda and Phil Myette for their steadfast strength and wisdom. A celebration of life will be held on Tuesday, April 16, 2019 at 2:00pm at Macedonia United Methodist Church, 2700 Jones Franklin Road, Cary NC 27518. Special music will begin at 1:30pm. The family will receive friends following the service in the fellowship hall. A graveside service will be held Wednesday, April 17, 2019 at 1:00 pm at Pine Forest Memorial Gardens, 770 Stadium Dr. Wake Forest, NC 27587. Flowers or contributions may be directed to the charity of your choice or, Transitions LifeCare, The Raleigh Symphony Orchestra or The Carolina Philharmonic. Arrangements by Brown-Wynne Funeral Home, 300 Saint Mary's Street Raleigh, NC.
See more See Less

In Memory Of Yang Xi