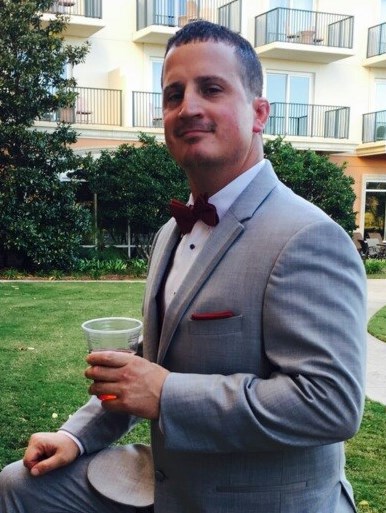 Eric Michael Edwards, age 41 of Rootstown, passed away tragically on May 11, 2022, while traveling for work in Syracuse, New York. Eric was born September 30, 1980, in Ravenna, Ohio, to parents Daniel and Mary (Martin) Edwards. He graduated from Ravenna High School in 1999, where he excelled as a wrestler. Later he graduated from American University with honors. After high school, Eric enlisted in the US Marines Corps. He proudly served his country as a Sergeant with two tours in Operation Iraqi Freedom. When Eric was discharged after 12 years, he became a US Air Marshal. He was stationed in Detroit, and quickly branded the group the “Motor City Marshals.” Eric had an extremely charismatic personality and the ability to light up any room he entered. Often, his entrance was accompanied by his favorite song, TLC’s “Waterfall.” Eric shared a love of flying with his brother and enjoyed traveling across the world. He truly was a Traveling Gypsy Soul. He also enjoyed riding his motorcycle, and would often quote “You never see anyone with a frown on a motorcycle.” Most of all, Eric cherished the time he spent with his children, nephews, and other family members. Eric is survived by his parents Daniel and Mary Edwards, his brother Jason (fiancé Monica) Edwards, his children: Tristan, Jaxon, Alana, Arie, and Bella Edwards, his nephews Caleb and Bryce Edwards, along with his loving aunts, uncles, and extended family members and many friends that he loved like brothers. Friends and family will be received Thursday, May 19, 2022, from 4:00 – 8:00 PM and on Friday, May 20, 2022, from 11:00 AM – 12:00 PM with a funeral service officiated by Pastor Bob Burgess at the New Testament Baptist Church, 3583 SR 59, Ravenna, OH 44266. Condolences and memories may be shared at www.wood-kortright-borkoski.com. In lieu of flowers, please consider a donation in Eric’s memory to the Semper Fi Fund https://semperfifund.org.
See more See Less

In Memory Of Eric Michael Edwards