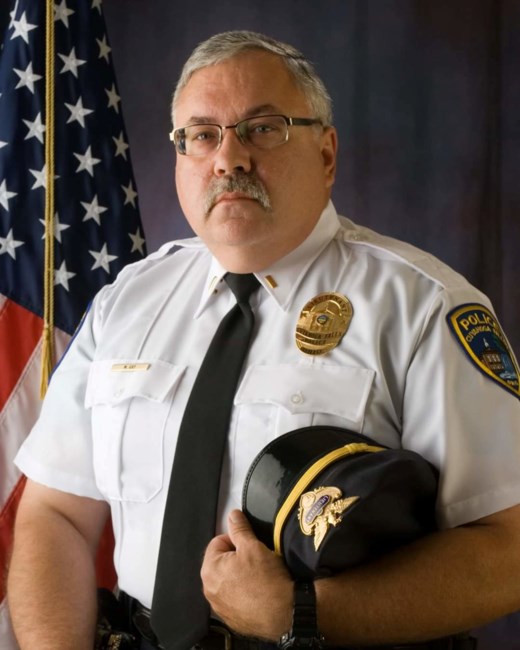 Michael “Mike” Gay, age 65 of Rootstown, passed away December 11, 2021 due to complications from COVID pneumonia. He was born July 6, 1956, in Akron, Ohio. Mike graduated from the University of Akron with a criminal justice degree which spawned a career and passion in law enforcement. Mike’s first shift with the Cuyahoga Falls Police Department was in 1981 and he continued working there until his retirement as Lieutenant on December 31, 2013. Michael was also a member of Cuyahoga Falls FOP Lodge #49 and continued working in law enforcement after his retirement. He was a member of the Portage County Sheriff’s Department, a Deputy US Marshal, an instructor for Stark State & the University of Akron police academies and worked security at the Federal Building in Akron. When he was home, Mike always kept busy tinkering around the house or working on his yard. Mike took pride in everything he did and it truly showed. On May 22, 1982, Mike married his beloved Sandi (Zupic). Together they raised two children, his daughter Melanie Gay and his son Steve Gay. Mike also loved animals and is survived by his dogs Chloe and Leo, as well as his grand dog Finnegan. Mike was preceded in death by his mother Sally Gay. Friends and family will be received Friday, December 17, 2021, from 4:00 – 7:00 PM at the Wood-Kortright-Borkoski Funeral Home, 703 E. Main St., Ravenna, where funeral services will be officiated by Pastor George Austin on Saturday at 11:00 AM. Interment will follow at Homeland Cemetery in Rootstown. Condolences and memories may be shared at www.wood-kortright-borkoski.com. In lieu of flowers, memorial contributions may be sent to Rose’s Rescue www.rosesrescue.net.
See more See Less

In Memory Of Michael Gay