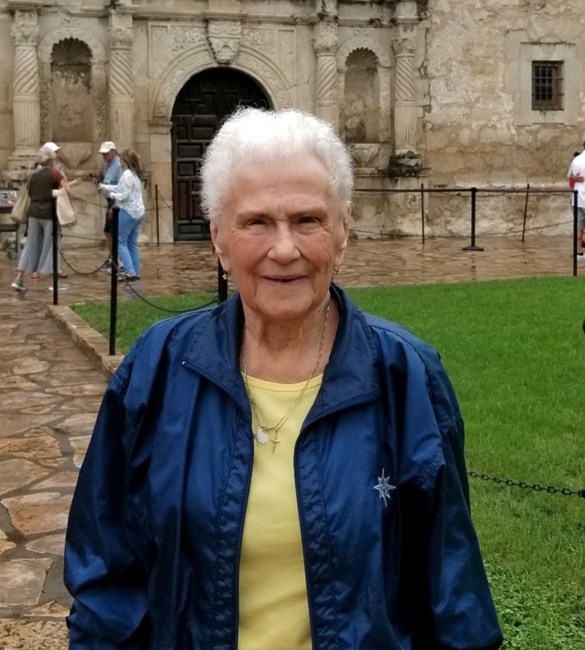 Agnes was born on December 19,1929 in Corpus Christi, Texas. She was the first child of Alfons and Mary Kadlecek. As a good Catholic family, there were other children to follow. Agnes was the oldest of 10 children, 6 girls and 4 boys. At the age of 19 she met and fell in love with Marine Joe Bill Brown. They were married October 15, 1949 in Corpus Christi, Texas, until his death on March 26, 1983. It was a marriage her father didn’t approve of as Agnes was Catholic and Joe was Baptist. But, one Christmas Day, they reunited and returned to being a close family. Agnes and Joe were blessed with 9 children. Kathleen Phillips, Michael Brown (passed December 16, 1981 at the age of 29), Kenneth Brown (passed April 13, 1954 at the age of 3 months), Nancy (Earl Rogers), Brenda (Gary DenAdel), Janet (Robert Lee), Stephen (Shari Hawkins Brown), Cynthia (Alan Snider), and Jennifer Caskey She was also blessed with 16 grandchildren, 27 great-grandchildren and 2 great-great grandchildren, all of whom she loved tremendously. Agnes is survived by sisters Mary Jo James, Louise Hobbs, Jeannie Brown, and Dorothy Diyer and brother Joey Kadlecek, along with numerous relatives. Agnes is preceded in death by husband Joe Bill Brown (3/26/83) sons Michael (12/16/81) and Kenny (4/13/54), parents Alfons and Mary (Skoruppa) Kadlecek, sister Georgia Brubaker and brothers Bobby, Edmund and Raymond Kadlecek. Agnes has been a resident of Renton, Wa since 1970. Agnes and Joe were confirmed as Lutheran in 1978 by Pastor Randy Grauer. She has been a member of her beloved Bethlehem Lutheran Church ever since. Agnes loved going on road trips with her beloved husband Joe in his big rig. They traveled throughout the country. After Joe’s death she continued her road trips in her car, until her children had to tell her NO MORE. Agnes got her first office job in 1987 as a secretary at Faull Funeral Home in Renton. She worked there for 23 years until they closed up. She then went to work at Greenwood Memorial Funeral Home for another 5 years until she retired in November 2014. Just before her 85th birthday!!!!! A quote by Agnes, given to church member Dielda Kuhlmann. “I have been blessed in my life, with family, with friends. I’ve had a lot of ups and downs but more ups. I am truly grateful for everything. I enjoy coming to Sunday services and try to attend all the Lent mid week services. I appreciate our traditions and the Divine Settings from our hymnals is something I especially cherish. I love the church, I love the people. I loved Pastor Grauer and Pastor Baade. I love Larry and Lynnie. I’m so glad Nancy got married here because that was the beginning of all this.There has been so many weddings. It’s been wonderful. We’ve all grown old together.” She truly loved her church. She will be missed by so many family and friends.
See more See Less

In Memory Of Agnes Anne Brown