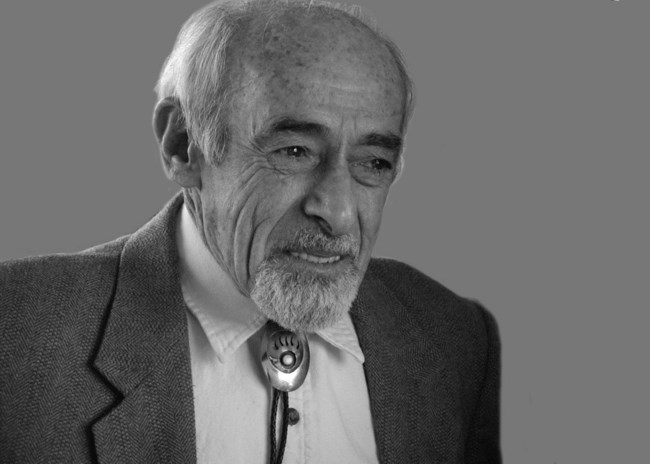 Herbert Julius Goldman, born March 8, 1922 passed peacefully on September 22, 2012. He leaves his beloved friend, Allene Goldman; his children, Lisa, Rayna, Suzanne, Emily and Justin; grandchildren, Eric, Mia, Aliyeh; and great grand-child, Derick. Herb served in World War II on the battleship U.S.S. South Dakota and was decorated May 1945 with the Air Medal for meritorious achievement. He graduated from the University of New Mexico with a degree in Fine Arts and enjoyed a rich life as an accomplished and renowned sculptor. Herb’s commissioned art is in New Mexico, Michigan, Texas, California, Kentucky, Arizona, Colorado and Africa. A private family memorial will take place in Dallas, TX. A public celebration of his life will be held in Albuquerque, NM, on May 9, 2013 at the South Broadway Cultural Center. Details available at website www.herbgoldman.com The Goldman family would like to express their appreciation to Golden Acres Living and Rehabilitation in Dallas. Should friends desire, memorial contributions can be made to the charity or cause of their choice. Born in Detroit, Michigan in 1922, Herb Goldman began training at the age of twelve as apprentice-assistant to Samuel A. Cashwan, Detroit sculptor. Mr. Cashwan taught at the University of Michigan and was head of the State of Michigan sculpture division for the WPA of the Federal Arts Project. At that time Goldman was too young to become a member of the group, however, he had the opportunity to learn techniques for executing large works of sculpture in various materials from European trained master carvers and casters. These include: modeling for terra-cotta, plaster, concrete, terrazzo; numerous mold-making methods and finishing techniques; various methods for carving wood and stone, and enlarging methodology. Goldman studied with Mr. Cashwan for seven years while attending The Detroit Institute of Art and a professional school, The Society of Arts and Crafts. In 1940 Goldman graduated from Cass Technical High School having taken a combined art and college preparatory curriculum in design, painting, drawing, printmaking and art history. From 1940-1942 Goldman worked in New York City for a mold and model making shop where he gained technical experience in plaster turning and casting, wax casting and modeling, bronze chasing, grinding, polishing, and mold finishing along with construction of complex piece molds. During this time he continued his studies at the Beaux Arts Institute of New York. After returning to Detroit and attending Wayne University for one term Goldman joined the armed services. Goldman served in the Navy during WWII, assigned to the battleship South Dakota. During his enlistment he was decorated with the Air Medal, numerous battle stars and citations. After the war Goldman moved to Albuquerque and entered the University of New Mexico, from which he received a Bachelor of Fine Arts degree with a major in sculpture and drawing in 1949. Goldman was granted a teaching assistantship upon completion of his undergraduate studies. While taking graduate course work he taught classes in sculpture, ceramics, welding, drawing, and designs at the university and privately. Herb Goldman was known for known for large-scale architectural and environmental sculptures, including some of the first natural habitats for zoo animals.
See more See Less

In Memory Of Herbert J. Goldman