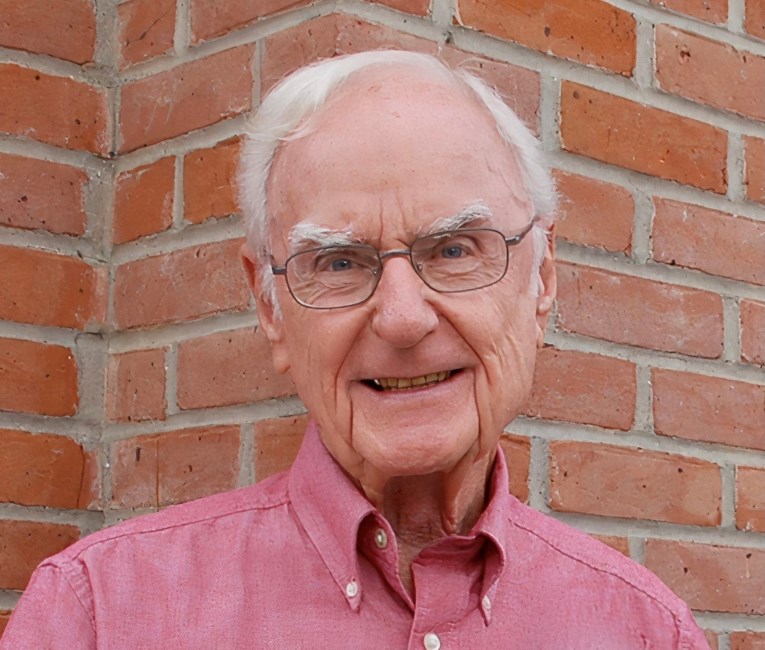 John Francis Sherman passed away peacefully on December 6, 2021, the day before his sister Anne’s birthday. Even though Anne was a year younger than John, he looked up to her, describing her as his confidant and best friend. We know he was ready to join Anne and all the saints for a heavenly birthday celebration. The son of Irish immigrants, John was born in New York City on April 3, 1933, and was incredibly proud of both his Irish heritage and his NYC roots. Though he moved from New York to Texas in 1960, he still could describe every stop on the A train, from the start of the line at 207th St. in his beloved Inwood neighborhood all the way down to Brooklyn, and he relished reminiscing about growing up in the city. From sneaking into football games at Columbia to jumping off the C-rock into the Harlem River, John and his Inwood buddies never lacked adventure or mischief. He said more than once that he only survived adolescence because his Mom prayed for him at Good Shepherd every day. A man of many professional accomplishments, John would tell you that his greatest joy came not from his work as an accountant and later a college professor but instead from his role as a grandfather. Dubbed “Papa” by Ann as she was learning to talk, Papa embraced both the moniker and his duties as a grandparent with equal zeal. Papa piloted a stroller with the adroitness of a pro, knew all the words to the Bob the Builder theme song, and displayed photographs, drawings, crafts, and schoolwork (cheers to you Kerry Franklin) in every inch of his home. He attended St. Rita school Masses, awards assemblies, Christmas pageants, choir concerts, cross country meets, and band recitals, always present, always cheering. Though most everything about John was old school, he happily embraced Blessed Carlo Acutis, intrigued by Carlo’s interest in computers, impressed with his dedication to the Eucharist, and fascinated by the idea of a millennial saint. Last fall John started praying that Carlo would cure him, hoping to be the beneficiary of a miracle. Even though John did not receive healing in the specific way he desired, John’s prayers and Carlo’s intercession undoubtedly helped John face his disease with uncommon perseverance. John enjoyed crossword puzzles, frozen waffles and hot dogs, and cold Coors beer. He appreciated a dip in the pool on a hot summer day, and he would walk for hours on the beach, though he defiantly refused to wear sunscreen and managed to burn himself to a crisp at least once every summer. Never particularly inspired by the idea of healthy eating, he loved peanut M&Ms, Wint-O-Green Lifesavers, and anything made by Little Debbie. A voracious reader, he loved the Dallas Public Library but definitely did not love the new digital self-checkout system. He cheered wildly for Notre Dame football and St. John’s basketball, thrilled when they won and pretty grumpy when they didn’t. Not a fan of pretense, monogrammed handkerchiefs were one of John’s few indulgences. He hummed Danny Boy when he felt nostalgic and sang - badly - Honky Tonkin’ when he was feeling spirited. John was preceded in death by his daughter Cindy Marie Sherman and by his special nephew Sgt. Kevin Joseph Lannon. John was also preceded by his parents Ann McKenna and Joseph Patrick Sherman and by his siblings Robert Sherman, Anne Sherman Lannon, William Sherman, and Joseph Sherman. John is survived by his daughter Kara Elizabeth Gehan and his son-in-law Peter Michael Gehan and their children Ann Frances Gehan, Patrick Michael Gehan, and John Charles Gehan; by his son Patrick Duncan Sherman and Patrick’s children Madeline McKenna Sherman and William Michael Sherman; and by his brother Kenneth Sherman, his sisters-in-law Cathy and Moira, and many nieces and nephews. We will celebrate a Mass of Christian Burial for John at St. Rita Catholic Community at 10 a.m. on Thursday, December 16, 2021, with Father Joshua Whitfield and Father Michael Baynham. Please join us after Mass for a reception in the St. Rita Parish Commons. If desired, please send memorials to the St. Rita Catholic School Endowment Fund (stritacc.weshareonline.org). Sing with all the saints in glory, sing the resurrection song!
See more See Less

In Memory Of John F. Sherman