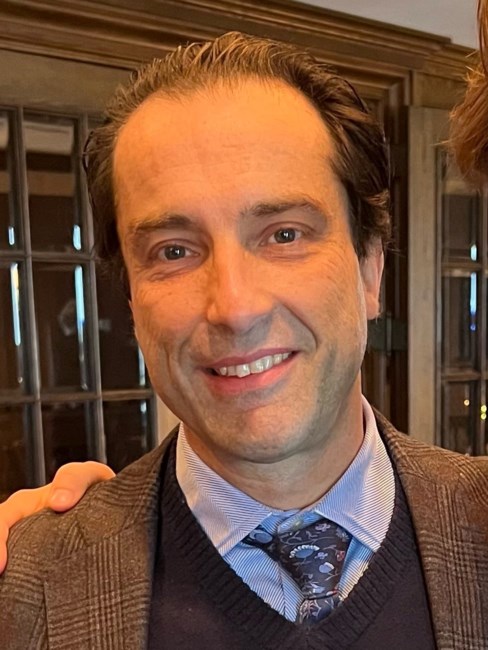 Zacary Paul Samuel Menerey, Sr., was welcomed into the presence of the Lord on September 9, 2022. Zac lived as a faithful Catholic, devoted husband, and caring father of six. He was born on January 3, 1971, in Bridlington, England, to Leslye and Robert Menerey. With his younger brother, Daniel, he spent his formative years in Norway, Scotland, and London before his family moved to Houston, Texas, the corporate headquarters of his father’s company in in 1985. Zac was born with a congenital heart condition, but he never let this prevent him from pursuing life to the fullest. He was an excellent student, graduating Cum Laude from Boston University with a Bachelor of Science in Accounting. He followed this by earning his CPA diploma in record time, and then earned his graduate degree in Business Administration from Rice University. He worked for one of the big four accounting firms, and took up posts in Dallas, Aberdeen, Scotland, and Buenos Aires. He was always modest about his scholastic achievements, and seldom spoke about work. Zac’s thoughts lay with his family and his lovely wife, Tiffany. Zac met the love of his life in Dallas in the Fall of 2001, and it was love at first sight. Zac and Tiffany were engaged on April 14, 2002, and married October 5 of that year. They welcomed their first child in August of 2003, with five more to follow in the years ahead. Zac was a reverent man, loving the Lord and putting him first in all things. His family was his greatest focus in life, and he brought up his family in the Catholic faith. He was also a diligent and motivated company man and was particularly proud to be a part of AT&T over the last several years. He had a love of history and theology and enjoyed gardening, cooking, and the art of wine making. His other passion was Tottenham Hotspurs Football Club of North London, and there was never a more ardent supporter. He and his eldest son, Samuel, never missed a game together. After 37 years in Texas, Zac never lost his accent or love for his native land, even though he became as Texan as Old Sam Houston. Zac passed along his heritage, as well as the occasional British terminology and pronunciation, to his six children. Zac is survived by his beloved wife, Anne-Tiffany Frances (Mueller) Menerey and their six children: Zacary Paul Samuel Menerey, Jr., David (Ari) Robert Meinert Menerey, Michael Edmund Augusto Menerey, Anne-Sophia Caroline Menerey, Emma Grace Cecilia Menerey and Zoe Beatrice Mary Menerey. He is survived by his parents: Robert James Menerey and Leslye Cecilia (Robson) Menerey, brother Daniel George Edward Menerey. He is also survived by sisters- and brothers-in-law: Herbert Clem Mueller, Jr. (Bert) and his spouse Amanda Mueller; Caroline Elizabeth (Mueller) Glover and her spouse Wade Glover; Juliana Claire (Mueller) Webb and her spouse Ian Webb; John Christian Mueller and his spouse Veronica Mueller; Mary Catherine Mueller, Grace Beatrice Mueller, and Matthew West Mueller; and nieces and nephews: Luke Menerey and niece Genevieve Menerey; Herbert Clem Mueller, III (Trey), Boyd, Hannah Kate, and Kayla Mueller; Bella, Adelaide, Austin, Worth, Joseph, and Walter Glover; Eloise, Audrea, Aidric, and Baby Webb; and John Christian Mueller, Jr. (JR) and Vivienne Mueller. Both in life and after, he was blessed to be part of such a big family. Zac Menerey was an active member of St. Rita Catholic Parish for over 10 years. He was a beloved husband, father, godfather, son, brother, uncle, and friend. A rosary will be prayed on Tuesday, September 13 at 7:00 at Sparkman/Richardson Funeral Home 1029 S. Greenville Ave, Richardson, TX 75081 with visitation to follow at 7:30. A funeral Mass will be held Wednesday, at St. Rita Catholic Community, 12521 Inwood Road Dallas, Texas 75244, with Father Joshua Whitfield celebrating. Fond memories and expressions of sympathy may be shared at www.sparkmanrichardson.com for the Menerey family.
See more See Less