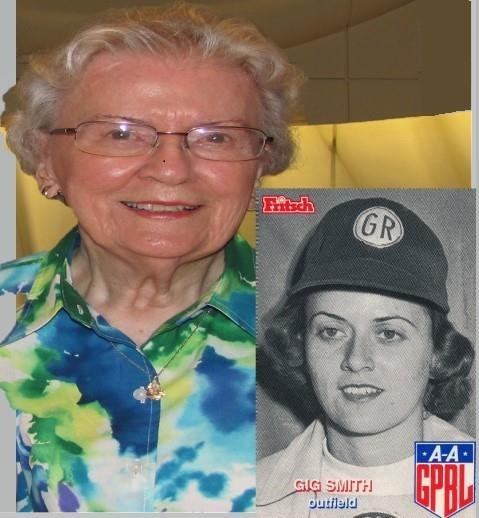 SMITH, HELEN LUCILLE “GIG, of Richmond, passed away Thursday January 17. Born in Richmond, she was the daughter of Walter and Mary Smith. Helen was born in 1922 and she enjoyed 97 years of great adventures and memorable accomplishments. A gifted artist, Helen attended the Pratt Institute in New York, but had to return to Richmond to care for her family and ultimately graduated from the Richmond Professional Institute. Eventually, she would become one of the first female industrial arts teachers in Virginia, spending her teaching career in the Richmond Public Schools. As gifted as Helen was as an artist, she was equally gifted as an athlete. Helen was a player in the All American Girls Professional Baseball League immortalized in the 1992 film “A League of Their Own”. Initially presented with the opportunity to play in the AAGPBL’s 1943 inaugural season, Helen instead followed her patriotic inclination and enlisted in the U S Army Women Army Corps to serve her country in the time of war. It was there she earned her lifelong nickname, “GIG”, which she explained later meant “Government Issue Gripe”. It seems that some of the provisions and equipment issued to her fell short of her expectations, and, in her own less than subtle way, she made her feelings known to her Army mates who immediately nicknamed her “GIG”. After her military service, Helen reached out to the AAGPBL scouts and she was signed to play the 1947 season for the Kenosha Comets, and she then played for the Grand Rapids Chicks in the 1948 season. In retirement, Helen often was asked to speak on her time with the AAGPBL, and she attended many of the AAGPBL Players Association reunions where she cherished reminiscing with other former players and friends. Helen was most proud when she and the other AAGPBL players were honored in 1998 with a permanent display in the National Baseball Hall of Fame in Cooperstown, NY. In 1975, Helen was inducted into the National Softball Hall of Fame. Helen loved God, her country, her family and loyal friends. She was one of a kind and she will be missed by all of those who loved her. She is survived by numerous cousins, nieces, nephews and many great friends. A memorial service will be held at 11:00 am on February 5, 2019 in the Montague Chapel at Westminster Canterbury, 1600 Westbrook Ave., Richmond, VA 23227. Helen will be laid to rest at Arlington National Cemetery on a date to be announced. Helen’s family and friends would like to express their sincere thanks and appreciation to Helen’s extremely devoted caregivers at Westminster Canterbury. Donations made in Helen’s memory to the charity of your choice are sincerely appreciated.
See more See Less

In Memory Of Helen Lucille Smith