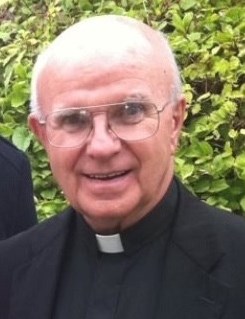 Rev. Bernard Patrick “Brian” Carroll entered eternal life on Monday, September 5, 2022, at St. Catherine’s Village in Madison, Mississippi. Father Carroll was 86 years old and celebrated 60 years in priestly life. Born on April 27, 1936, in Dublin, Ireland to the late Dan and Bridget Carroll, Father Carroll enrolled at St. Patrick’s College in Carlow, Ireland and was ordained for the Diocese of Jackson (nee Natchez-Jackson) after completing his seminary studies on June 9, 1962. Arriving in the diocese in September 1962, Father Carroll was assigned to St. John’s Parish in Biloxi and served as a teacher at Biloxi High School. In 1967, he served on the faculty of Our Lady of Victories High School in Pascagoula and as assistant pastor of St. Joseph Parish in Moss Point. From the coast, Father Carroll then made his way up to Vicksburg teaching at St. Aloysius High School and serving as assistant pastor at St. Paul Parish in 1968. He then served on the Diocesan Board of Consultors as a representative of assistant pastors. In 1969, Father Carroll was assigned as assistant pastor at Annunciation Parish in Columbus and served as chaplain at the Mississippi University for Women (nee Mississippi State College for Women). Traveling south, Father Carroll was assigned as pastor of St. Alphonsus Parish in McComb for six years, in addition to serving as chaplain at Southwest Junior College. After McComb, he served as pastor of St. Patrick Parish in Meridian and again as a consultor for the diocese. After serving as dean of Deanery III and VI, Father Carroll served as the Pro-Synodal Judge to the Marriage Court before being appointed pastor of St. Elizabeth Clarksdale, where he ministered for 12 years. From the Delta, Father Carroll was appointed pastor of St. Paul Parish in Flowood, where he served for another 12-year stint. At St. Paul, he also loved spending time at the Early Learning Center, singing lullabies to the children whenever he got a chance. While at St. Paul, he served as dean of deanery I for two years, in addition to serving again on the College of Consultors and Presbyteral Council. The year 2010 brought Father Carroll to St. Richard Parish in Jackson as a senior associate and sacramental minister of St. Stephen Parish in Magee. He served in both parishes until he retired on New Year’s Eve of 2014. Father Carroll was preceded in death by his brother Donal and his parents. He will be sadly missed and fondly remembered by his brothers Anthony and Paddy; sisters-in-law Ethel and Teresa; nephews Daniel, Brendan, Anthony, Donal, Padraig and Brian; nieces Rebecca, Rachel, Mary, Ruth, Eleanor and Leah; grand-nephews, grand-nieces, extended family; Bishop Joseph Kopacz; fellow priests and religious of the Diocese of Jackson; relatives, neighbors and his many friends in the US and Ireland. Visitation will be Thursday, September 8 from 5-7 p.m., followed by the Rosary at 7 p.m. The Funeral Mass will be Friday, September 9 at 11 a.m. Both services will be celebrated at St. Paul Catholic Church in Flowood. A second funeral will be held in Kilmore, Co. Roscommon next week. Father Carroll will be buried in Kilmore Cemetery in Carrick-on-Shannon, Co. Roscommon, Ireland.
See more See Less