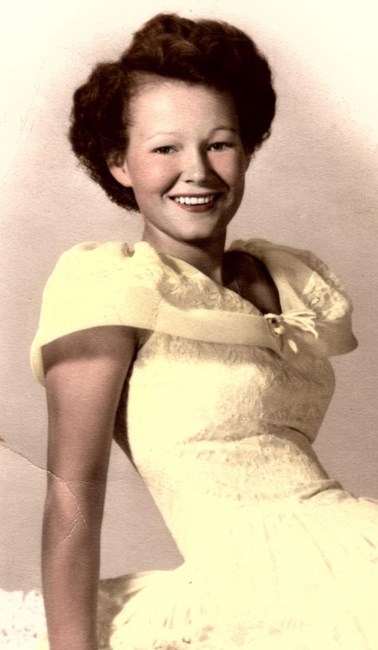 Sonia Gay Drewry, 89, entered into the assurance of eternal life with her Lord and Savior Jesus Christ on May 6, 2022. She was born January 20, 1933 in Stidham, Oklahoma to Guthrie and Atha Ewing. Gay was born in the midst of the Great Depression, a time that endowed its children with a strength and resolve that would serve them their entire lives. Gay was no exception to this. The oldest in her family, she was often counted on to be mother as well as sister. She was fiercely loyal and protective of her family. She met Fay Drewry, her husband for life in California and they were married August 30, 1953. Fay served in the Air Force for 23 years and Gay was a faithful and supportive military wife. Upon Fay’s retirement from the Air Force, the two of them decided to relocate their family to Fay’s hometown of Witt’s Spring, Arkansas where they lived until their sons completed high school. After both boys graduated, they relocated to Rogers, Arkansas where they both worked and retired with Walmart. They have been happily married for 69 years. Gay’s life is testimony to the truth of God’s promise to those who believe and follow Him. Although she is no longer here, her example of love, loyalty, and steadfastness will never leave her family or those that knew her well. Gay was preceded in death by her parents. She is survived by her husband, Fay; her two sons, Timothy (Debra) of Edmond, Oklahoma and Donald (Lisa) of Bentonville, Arkansas; nine grandchildren; two great grandchildren; her sister, Sue (Flower Mound, TX); brothers, Joe (Reserve, NM), and David (Phoenix, AZ), and a sister, Jan (Caringbah, Australia). Funeral services will be held at First Baptist Church of Centerton, Arkansas on Thursday May 12, 2022 at 10:00 a.m. with Pastor Joshua Babb officiating. Private entombment will be in Benton County Memorial Park Mausoleum in Rogers, Arkansas. Arrangements are under the care of Rollins Funeral Home in Rogers. Fond memories and expressions of sympathy may be shared at www.RollinsFuneral.com for the Drewry family.
See more See Less

In Memory Of Sonia Gay Drewry