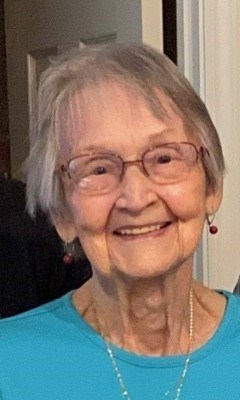 Gertrude (Trudy) LaPointe was born on January 2nd, 1928 in Skowhegan, Maine and peacefully passed away October 6th, 2021 after a long and fruitful life. Her family moved to Massachusetts when she was just a toddler. Being raised in a French Roman Catholic family and taught by nuns she graduated high school in an era when there were only 10 other girls in her graduating class. All through most of her school years she learned to play the violin. A violin she ultimately owned and played the rest of her life. She was such a gifted violinist and her children were blessed to be her appreciative audience.

She married her husband, Paul Joseph LaPointe, at the tender age of 19. They were married for 57 years before Paul preceded her in passing in 2006. Both of them were raised in French/English bilingual families and retained that diversity through their lives, occasionally to the chagrin of their children!

Trudy devoted her life to raising her family. They raised their children in Miami, FL when Paul was hired as a flight engineer for National Airlines and transferred there. She was a longtime founding member of the Starlighters, a group started by and comprised of the wives of National Airlines flight engineers. Every year they chose a charity to raise donations for through various craft and baking type sales. Growing up in the era she did, a great value was placed on women developing their homemaking skills, including sewing, which she passed on to all of her daughters. It wasn’t until she was in her 70’s that she decided to try her hand at quilting and created quite a few beautiful hand quilted quilts.

In retirement, she and Paul built a new home and life in Lady Lake, FL and enjoyed traveling far and wide throughout this country and Canada in their RV. Trudy often mentioned how much she loved those traveling years. For awhile they even joined a square dancing group and loved every minute of it.

Trudy loved living life and made it known she knew she’d had a very good life.

In Memory Of Gertrude LaPointe (Robinson)