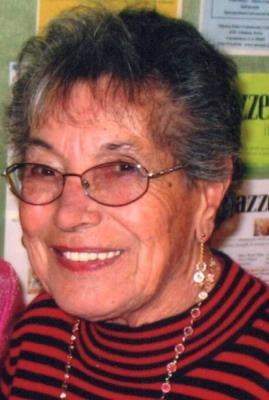 Elizabeth (Betty) Harlan (Albert) died peacefully in Sacramento, CA on August 7, 2022, at the age of 97. Elizabeth was a spunky “young” lady with a passion for dancing. A beloved mother, grandmother, and great grandmother. She was always eager to enjoy and celebrate every occasion. Elizabeth is survived by her sons Forest Flanigan (Cristina Creo) and Jeff Harlan, grand children Jessica Gollaher (Jeff), Faith Flanigan (Bela Spohrer), Tage Stimmel (Josh), Andrea Creo (Tobias Paquet) and great grandchildren Ekijah Creo Christianson, Olso Spohrer, and Vayla Paquet. Her sister Martha Bush (103 years old) and numerous nieces and nephews. She is preceded in death by brothers George, Mike, Eli and Johnny Albert and sisters Katie Isaacson and Mary Cook. Both her husbands Jack Flanigan and Richard Harlan and her beloved dog Bo. Elizabeth was born on December 13, 1924, in a two-bedroom house with no running water in Bone Trail, ND to Joe and Jenny (Zine) Albert, the second youngest of eight children. She attended country school and at the age of 16 moved to Sacramento, California to live with her family. After moving to Sacramento, she took a wartime job at McClellan Air Force Base and when the war was over, she went to cosmetology school and became a manicurist (for men only). She married Jack Flanigan in 1952, because he was a great dancer and a navy veteran. They moved to Reno, Nevada where their son, Pat was born. After the passing of her first husband Jack, she left Reno with her young son and moved back to Sacramento with family. She worked with her sister Mary who opened a boarding house for men on 21st street in midtown in 1959. Elizabeth was remarried to Richard Harlan an electrician in 1963. She then became a devoted stepmother to his sons Steve and Jeff Harlan. She was widowed for the second time in 2005. Her family remembers her as a fun-loving, comical, dancing queen who was always up for going out to see music and shake her booty. Her nephew Emmit Barkie gave her the moniker “Buns”. She was an accomplished seamstress and made many of her clothes. Visitation will be on Tuesday August 30th from 4 pm to 7pm at Nicoletti, Culjis, & Herberger Funeral Home. The funeral is scheduled for 10am on Wednesday August 31st at Nicoletti, Culjis, & Herberger Funeral Home (5401 Folsom Blvd. 95819), with a graveside burial at Saint Mary’s Cemetery (6700 21st Ave 95824) at 12pm, and reception to follow at Clunie Community Center at McKinley Park in the Grand Hall (601 Alhambra Blvd. 95816). All are welcome to attend. Elizabeth loved flowers; however, if you would like to donate in lieu of flowers, please make it to the charity of your choice. The family would like to thank the staff at Mercy McMahon Terrace and Mercy Hospital for their extraordinary care and dedication to Elizabeth.
See more See Less