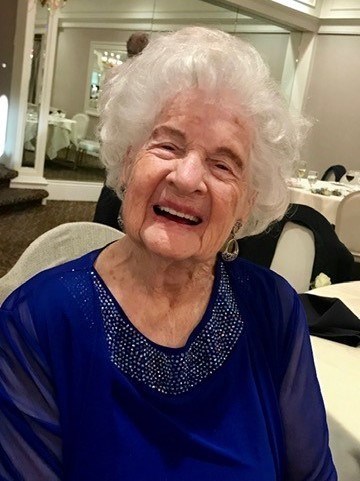 Sacramento, California - On January 22, 2023, we said goodbye to a beautiful, loving and compassionate woman, Violet, who our family referred to as our "National Treasure." Born on October 28, 1921, in the copper mining town of Butte, Montana, she was the seventh of eight children born to John McNellis and Susan Byrne McNellis. Her mother passed when Violet was sixteen years old. Her father raised the family and died in 1952. The family stayed strong through the Great Depression, World War II, mining strikes and accidents, illness and severe Montana winters. Violet attended high school at Girls Central Catholic High in Butte, Montana and enjoyed many activities such as playing volleyball and basketball, serving as class president for two years and taking on the role of Editor-in-Chief of the school newspaper for one year. After graduation from Girls Central, Violet entered St. James School of Nursing and upon completion of her RN degree, she spent time in Denver, Colorado, to study advanced nursing for six months. After her time in Denver, she returned to Butte and taught nursing at her alma mater for one year. She remained in close contact with her Montana family, friends and classmates and she was honored at her St. James Nursing School 70th class reunion. On July 25, 1946, Violet married her best friend since childhood, Edward D. Corr, also from Butte, Montana. Shortly after their marriage, Violet and Edward moved to Richmond, CA, where Violet worked as a Registered Nurse and Edward began his education in order to become a Certified Public Accountant. As devout Catholics they participated fully in their local parishes. In the years following their move to California, six children were born: Kathy, Colleen, Edward, Kevin, Timothy and Maureen (Peggy). When asked about having such a large brood, Violet would respond with a resounding "Never a dull moment!" A move to Sacramento in 1960 would bring Violet to the home she would reside in until her death. During her time in Sacramento, she navigated children's school activities, sports, being President of All Hallows Mother's Club, and her role as the unofficial neighborhood nurse. In the late 1960's she returned to nursing part-time and also became an advocate for the elderly acting as an ombudsman with the Grey Panthers for complaints against nursing homes in order to promote dignified care for the residents. Charity was always a central tenant in her life, and she donated generously to many causes. Violet's devoted husband, Edward, passed away on April 26, 2006, only two months shy of their 60th wedding anniversary. Throughout their years together they enjoyed travel which included two trips to Ireland where they discovered many relatives. Though she missed Edward dearly, she stayed active after he died and enjoyed numerous family gatherings, celebrations, travel, quiet reading and constantly entertaining visitors. She enjoyed keeping in contact with family and friends by writing letters and sending cards for special occasions to her vast number of family and friends and kept this practice up until shortly before she passed away or "eloped" as she would say with a chuckle. Violet loved and cherished her six children and their spouses: Kathy Jones (Daniel), Colleen Hawkins, Edward Corr (Dee), Kevin Corr (Linda), Timothy Corr (Cathleen), and Maureen (Peggy) Whalen (Terry). She also loved and cherished her twenty grandchildren and seventy-eight great grandchildren. Violet was preceded in death by her husband Edward, son-in law John Gerald Hawkins, grandchildren Jessica Cathleen Corr and Justin Thomas Corr, and great-grandsons Adam DeTar and Eli Joseph Corr. Visitation will take place Wednesday, February 1, 2023, from 4PM to 7PM, with Rosary at 6PM at Nicoletti, Culjus and Herberger Funeral Home, 5401 Folsom Blvd, Sacramento, CA 95819. Funeral services will be held on Thursday, February 2, 2023, at St. Stephen the First Martyr Catholic Church, 5461 44th Street, Sacramento, CA 9520 beginning with a second family rosary at 9:30AM and Mass to follow at 10AM. Graveside service and burial will follow at St. Mary Cemetery, 6509 Fruitridge Road, Sacramento, CA 95820. Memorial Luncheon will be served in the St. Stephen's church hall. 36,976 days of life She felt love, she saw strife But she never let go of her compassion For our Violet it was always in fashion Fond memories and expressions of sympathy may be shared at www.nicoletticuljisherbergerfunerals.com for the Corr family.
See more See Less

In Memory Of Violet Rose Corr