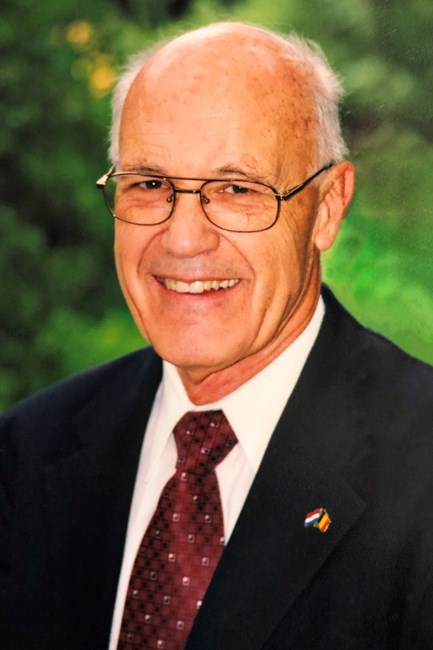 Donald Melvin Peck, Jr., beloved father, grandfather, brother and friend passed away at the age of 88 on February 15, 2019 in Rexburg, Idaho, after struggling with dementia for several months. Dad spent his final hours with his son David, and his three dear girls were able to visit and spend precious time with him shortly before his passing. Born November 1, 1930 in Midvale, Utah to Donald Melvin Peck, Sr. and Twila Gagon Peck, he spent the majority of his childhood in Pioche, Nevada, graduating from Lincoln County High School. He briefly attended Branch Agricultural College (now Southern Utah University) before serving in the Korean War as a Corporal in the U.S. Army Signal Corps. After completing a mission for The Church of Jesus-Christ of Latter-day Saints in the Netherlands, he returned to his family who had relocated to Salt Lake City, Utah. There he met and fell in love with his eternal companion, Marylyn Lucille Moore. They were sealed in the Salt Lake LDS Temple on June 18, 1956 and spent 44 years together before Marylyn’s untimely passing in 2000. Donald held many callings in the LDS Church. He served in Sandy, Utah as a Bishop and member of the Cottonwood Creek Stake Presidency. His last calling was a Temple Sealer both in the Jordan River Utah and the Denver, Colorado temples. He served with his beloved wife Marylyn as President of the Belgium Antwerp Mission and the Netherlands Amsterdam Mission from 1993-1996 and was well-loved by members and his missionaries. Donald valued education personally and professionally. He attended the University of Utah, earning a B.S. (1958) and an M.S. (1962). He taught at Olympus Junior High School and Brigham Young High School before going on to earn a Ph.D. in 1971 from Arizona State University. He spent the majority of his career teaching at the University of Utah in the Educational Studies Department from 1970-1993. His pastimes included woodworking with his colleague and friend Stan Jencks and fishing with his friend Lou Chatterley. He created many works of fine furniture, cabinetry, and art which he shared with friends and family. Most importantly he loved reading the scriptures and spending time with his family. He had a special talent for listening and making all around him feel special and loved. He was preceded in death by his eternal companion, Marylyn Lucille Moore Peck, his parents, granddaughter Elizabeth Rachel Peck, and his brother, Ralph Lynn Peck. Survived by his son, David Donald Peck (Rachel), Rexburg, Idaho; Shannon Diane Peck Woods (Dan), Phoenix, Arizona; Erin Lynne Peck Stauffer (Tony), South Jordan, Utah; Keri Sue Peck Draney (Clark), Twin Falls, Idaho; 15 grandchildren, Andrew, Jonathan, Anne, Julianne, Miriam, Savana, Spencer, Christian, Jacob, Sterling, Joshua, Cameron, Mercedes, Caitlin, and Colton; 12 greatgrandchildren, Michael, Elizabeth, Emma, Judah, David, Evelyn, Randy, Abigail, William, Natasha, Collette and Sophia; his brothers David Peck and Joseph Peck and his sisters Twila Jean Van Leer and Leanne Ward. Following Marylyn’s death, he was married for time to Florence Myles of Denver, Colorado, who also survives him. Services will be held at 11 a.m. on Saturday, February 23, 2019, at the Old Mission Road Chapel, 1433 Old Mission Road, Sandy. Friends and family may call at a viewing on Friday February 22, 2019, beginning at 6 p.m. at the Wasatch Lawn Mortuary, 3401 South Highland Drive, and from 9:30 to 10:45 a.m. prior to services. Interment, Wasatch Lawn Memorial Park. Dad, we love you more than a bushel and a peck and will miss you greatly but find joy in the knowledge of your reunion with Mom––your best friend––holding hands throughout eternity.
See more See Less