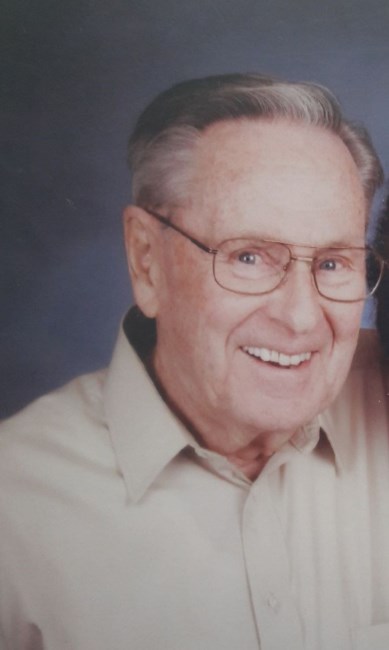 Our wonderful father Raymond Robins Larsen, age 98, passed away April 11, 2019 in Salt Lake City. He was born May 16, 1920 in Salt Lake City at the home of his parents, Herbert Raymond Larsen, and Edna Robins Larsen. Ray graduated from South High. He served in the Navy during World War II in the Philippines. Ray married Artella Williams in 1948. They had three children and were married until her death in November, 1986. Ray loved radios and electronics his whole life. He built his first radio himself at age 13 and was a lifelong member of the Utah Amateur Radio Club. His love of electronics led to work in the electronics business. He worked at Standard Supply Company most of his life and made many lifelong friends there. Ray held many positions in the LDS church throughout his life and into his 90’s. He was a member of the Valley View 7th ward and later the Valley View 1st ward with many enduring friends in both wards. Ray married Miriam Candland Thomas in January, 1997 and had many happy years until her death in 2013. Ray is survived by his children Clifford Larsen and Cindy Larsen (Gene), Allan Thomas (Paula), Brooke Thomas (Cathy), Annette Henderson, Tracie Summerhays (Todd), 12 Grandchildren and 17 great grandchildren. Ray was preceded in death by his wife Artella, second wife Miriam, daughter Christene, and 3 sisters and 4 brothers. Funeral services will be held Wednesday, April 17 at the Valley View First Ward at 12:00 noon (3820 S 2000 E, SLC UT 84124). Friends and family may visit at Wasatch Lawn Tuesday from 6:00 to 8:00 p.m. and Wednesday 11:00 till noon at Valley View First Ward. In Lieu of flowers, please make donations to the American Diabetes Association in Raymond's name.
See more See Less

In Memory Of Raymond Larsen