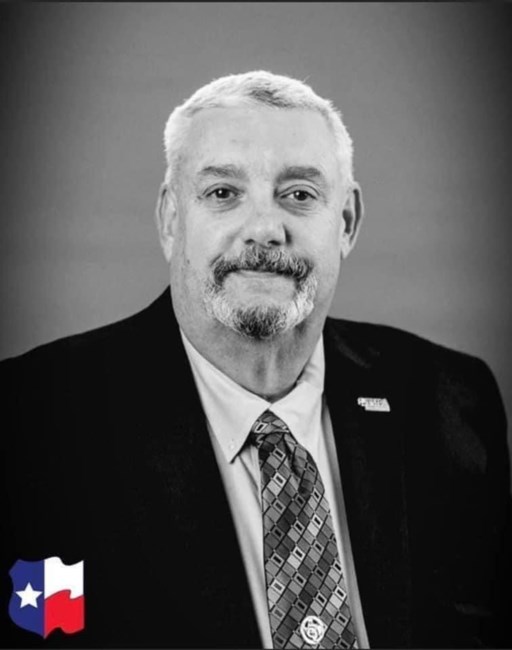 Dick Robert Brock, 60, of Round Rock, Texas passed away on Sunday, August 15, 2021. He was born on February 19,1961 in San Angelo, Texas to Robert and Janie Brock. Dick attended San Angelo Central High School and graduated Class of 1979. During this time, he successfully completed all the requirements to become an Eagle Scout. He went on to attend Angelo State University (ASU) where he majored in Criminal Justice. While attending ASU he worked full time as a dispatcher for the San Angelo Police Department (SAPD). Then, following in his father’s footsteps, he began his career as a police officer with the ASU Police Department. He transitioned to the San Angelo Police Department where he served as a patrolman, field training officer, ID (crime scene) officer and detective. During his time at SAPD he served as the President of the San Angelo Police Officers Association and worked his way up through the board positions of Texas Municipal Police Association (TMPA) to become president in 1996. After a distinguished 23+ years of service, he retired from SAPD in 2003. His giving back to the community did not stop. He retired to take an appointment as a Tom Green County Constable. Subsequently, he was overwhelmingly elected by the citizens to continue serving as the Constable for PCT 2. In 2005, he volunteered to assist TMPA with supporting the law enforcement officers that responded to Hurricane Rita. This is when he discovered a new calling. Instead of serving the citizens he wanted to serve those who served the citizens. He applied to be a field representative for TMPA and was employed in that position until death. He was preceded in death by his parents Robert “Bob” & Janie Brock, his paternal grandparents, Lewis & Hazel Brock and his maternal grandparents, E.L. & Minnie Mae Crowell. He is survived by his beautiful wife of 39 years, Leslie Brock and his brother Stephen Brock. Funeral Services will be held on Monday August 23, 2021 at 11am at Johnson Street Church of Christ, 2200 Johnson Street, San Angelo, Texas. Interment will follow at Johnson’s Lawnhaven Memorial Gardens, 4989 FM1223, San Angelo, Texas. In lieu of flowers the Brock family asks that you make a donation in Dick’s name to either Saving A Hero’s Place or the Texas Police Officer’s Memorial Renovation Fund, both passions of Dick’s.
See more See Less

In Memory Of Dick R. Brock