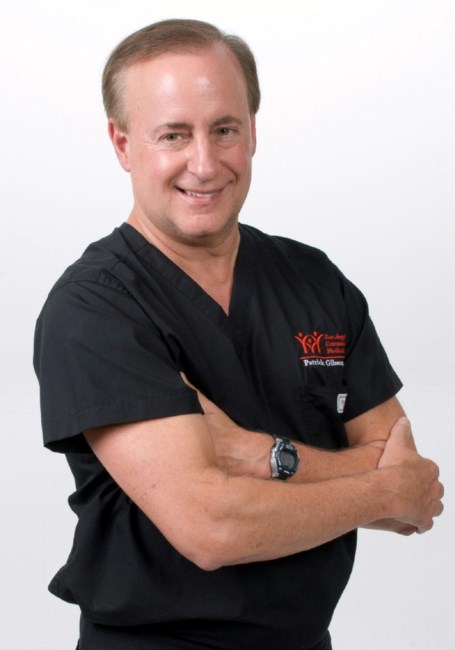 Patrick E. “Pat” Gibson, MD, passed into eternal life on Thursday, September 12, 2013. His was a life marked by boundless joy, contagious laughter, genuine compassion, abiding faith, and a deep-rooted love for his patients, his friends and his family. The mere mention of his wife, Alicia, or his twins, Jourdan and Clay would spark a smile that lit up the room and prompt him to whip out his phone to share their most recent photos and stories. Pat, who was born on January 5, 1952 in Houston, was raised in Corsicana, Texas. He was the youngest of Dr. Louis E. and Betty Lou Gibson’s four children. Medicine was in his blood. Pat got his first taste of the profession racing along East Texas highways in a low-slung sedan with his father, a respected general surgeon, at the wheel en route to medical emergencies. As a high school science fair project, Pat built a rudimentary pacemaker that kept a rabbit alive for an extended period of time, earning him top statewide honors in the International Engineering and Science Fair. Early on, Pat recognized that science and faith were not mutually exclusive, assisting his father with surgeries in the jungles of Ecuador as part of medical missions. Honoring the intersection of science and faith, Pat chose to attend Baylor University upon graduation from Corsicana High in 1970. At Baylor, he became a lifelong Bear fan and later, met Alicia, the love of his life, on her first day on campus in 1974. In 1980, Pat earned his M.D. from Southwestern Medical School in Dallas. Upon completing his surgical residency and a vascular fellowship in 1986, he moved to San Angelo and joined the staff of San Angelo Community Medical Center (SACMC) where he served as both director of Trauma and Chairman of the SACMC Board of Directors from 1995-2003. He continued to serve as a SACMC director until his passing. He was also the medical director for the local mammography program administered by the San Angelo campus of the Laura W. Bush Institute for Women’s Health. Described by colleagues as a physician with “hands for surgery and an exceptional heart for people,” Pat was known by medical professionals and patients alike for his compassion, his empathy and his ability to connect with people from every walk of life. His quick wit and ready grin instantaneously turned strangers into friends. One of his signature moves was gifting people with nicknames that they proudly wore as badges of friendship. While medicine was definitely a priority, it was not his sole focus in the community. He was dedicated to making life better for those around him through art, education and increased business opportunities. Pat and Alicia strongly supported local art institutions, including the San Angelo Symphony, Angelo Civic Theatre and standalone cultural projects such as the Feast of Santa Angela. From first-hand experience, Pat knew that creativity has the power to change individual lives and communities. This passion for the arts can be traced, in part, to his paternal grandmother, Jewel Gibson, a noted Texas playwright. As a youngster, Gibson, along with his siblings and cousins, would perform original plays written for their family’s entertainment. Later in life, the austerity of his white coat belied his status as the lead guitarist and singer for The Others, a classic rock n’ roll band that he and his friends formed in high school. The group, which won the State Fair of Texas Battle of the Bands in the early 1970s, continued to perform together periodically. The Gibsons also joined forces for the community’s greater good through the United Way and the San Angelo Schools Foundation. Pat also served as a director at Texas State Bank since 1993, director of the San Angelo Chamber of Commerce, and as a member of then-U.S. Senator Phil Gramm’s Rural Health Care Task Force. While Pat embraced life at full speed, he recharged his batteries in the great outdoors, pursuing his twin passions of hunting and fishing. In the wilds, he soaked up the majesty of nature and forged deep relationships with his fellow-outdoorsmen that spanned decades. Pat is preceded in death by his parents. He is survived by his wife, Alicia; his daughter, Jourdan; his son, Clay, daughter-in-law, Elizabeth, and granddaughter Mary Carlisle; as well brother Dr. Mike Gibson and spouse Debbie of Dallas; sisters Nancy Hodges and spouse Larry of Bolivar, Mo., and Gail Clowe and spouse Don of San Antonio. Pat has six nieces and nephews, Cameron and Shannon Hodges, Duncan and Beth Clowe, and Lauren Bilboa and Ross Gibson. A public celebration of Pat’s life will be held at 2:30 p.m., Tuesday, September 17, 2013 at the front entrance of the West Texas Medical Associates building located on Executive Drive. The Gibson family wishes to thank their extended family at West Texas Medical Associates and San Angelo Community Medical Center, and the entire community of San Angelo for their heartfelt support and outpouring of prayers. Memorial donations may be sent to the Laura W. Bush Institute for Women’s Health or the San Angelo arts or education organization of your choice.
See more See Less

In Memory Of Pat Gibson