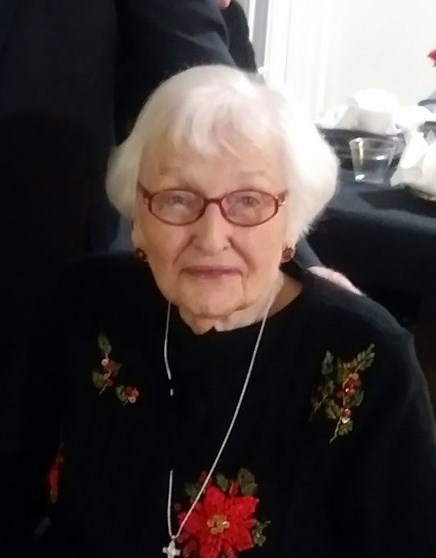 Gertrude Krueger, age 100, went to be with the Lord on March 11, 2019. Born on a farm near Brenham, Texas on August 7, 1918 she was preceded in death by her parents, her husband Ben Krueger, sister Norma Luedemann, her brothers Ray and Erwin Luedemann, and granddaughter Cindy Thompson. She is survived by her sons Ralph (Vicki) Krueger and George (Janet) Krueger; Grandchildren Michelle (Pete) Villarreal, Ken (Lisa) Krueger, Will Krueger and Kate (Aaron) Barber; Great Grandchildren Kailey Thompson, Matt Villarreal, Mike Villarreal and Colt Krueger; and Great Great Granddaughter Kinsley Thompson. Gertrude Luedemann was born August 7, 1918, the second of four children of Nathalie Gindorf Luedemann and John Albert Luedemann. She was raised on the Luedemann farm in Washington County, Tx where her father also had a dental office in the family home, a home that had no indoor plumbing or electricity for much of her childhood. She traveled many days to school by horse drawn buggy or horseback. Always encouraged by her parents to get an education, she began her college education at Mary, Hardin, Baylor College in Belton,Tx an institution whose female only students started each day with time in the chapel. After completing her sophomore year of college at Southwest Texas State Teachers' College at San Marcos, she met state requirements which allowed her to begin her teaching career at the elementary school level. Gertrude taught for four years at Salem, Tx, earning $600 for each eight month long school year. During these four years of teaching at Salem, she took summer school courses and later graduated with her Bachelor's Degree from Southwest Texas State Teachers' College. Taking her father's advice, she continued her education by attending the University of Texas and earning her masters' degree. At UT she was also able to occasionally see her future husband, Ben Krueger, who had also been a student at San Marcos during her time there. Following her completion of her masters' degree and Ben's earning of his law degree from UT, the two were married in 1944. They both began their careers in Austin, but in coming years they also followed career opportunities in Corpus Christi and Midland, TX. In 1947 their son Ralph was born followed by George in 1951. In the early 1950s Gertrude and Ben became members of Christ Lutheran Church and they purchased their San Antonio home on Irvington Drive where Gertrude lived for over 65 years. Gertrude taught English, primarily freshman English, for 22 years at Alamo Heights High School. The greatest highlight of her life was her many friends and family. Throughout her life she thrived on her strong faith in God and on the close ties she made with fellow church members, teaching associates as well as students, members of her Terrell Heights neighborhood, and individuals encountered in daily life. As she would readily tell you, she was thankful for "a good life with many good friends, especially young friends who are doing positive things in life". Her family knows that she herself did many positive things in her daily life and she continued to make new friends as well as enjoy her life-long friends. Her love of others, her zest for life and her daily example of how a life should be lived will be missed by all who knew her.
See more See Less

In Memory Of Gertrude L. Krueger