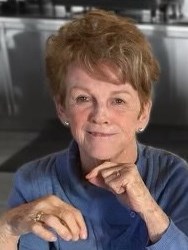 Gladys Inez Holloway Cross, 80, passed away peacefully on August 2, 2022, at her home in San Antonio, Texas. Inez was born on January 18, 1942, to the late Manuel Maynard Holloway and Janie Holloway. She is preceded in death by her parents and husband, Kenneth Ray Cross, to whom she was married for 56 years, as well as her sister Birdie May Holloway Welborn, brother Ernest Holloway, brother Manuel Maynard Holloway, Jr., and brother William “Bill” Holloway. Inez is survived by her sister, Dorothy Holloway Burcher of Grafton, Virginia, as well as her two children, Kimberley Sisson (Thor) of Belleville, Illinois, and Kelley Weigand (Eric) of Cedar Park, Texas; and grandchildren Kate Logan, Kevin Logan, Jillian Sisson, Kendall Weigand, and Claire Weigand. Inez was born and grew up in Poquoson, Virginia, where she graduated from high school in 1960. She began her 40-year civil service career working at the Naval Weapons Station in Yorktown, Virginia, before she married Ken in 1964 and thus began her many years as a military wife. Ken’s career in the Air Force took Inez on many adventurous travels including being stationed in Hawaii, Virginia, Japan, Arkansas, Alaska, and Texas. She had a love for bingo and always found great joy in traveling to casinos to try her lucky hand at the slot machines. A celebration of Inez’s life will be held at Fort Sam Houston National Cemetery in San Antonio, Texas, on Monday, November 21, 2022, at 10:00 a.m. following which she will be interred next to her husband, Ken. Fond memories and expressions of sympathy may be shared at www.SunsetNWFuneralHome.com for the Cross family.
See more See Less

In Memory Of Gladys Inez Cross