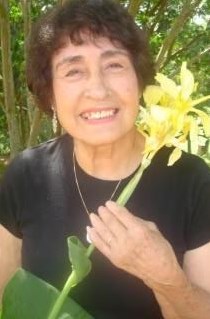 Maria Antonia Martinez Rivera 94, of Clarksville, TN passed peacefully on the morning of January 11th 2022 in San Antonio, Texas. Maria was born Feb 22, 1927 in San Sebastian, Puerto Rico to her mother Candida Jimenez and father Jose Gallo Martinez. Maria enjoyed traveling, which started with her first trip away from Puerto Rico in her early 20’s to visit the Dominican Republic. Afterwards, she traveled to New York City and got a job at the empire state building. When she was married in 1955 she followed her former spouse, Juan Rivera-Carballo to Washington state and then to Fort Wainwright, Alaska. When Juan was stationed in Mainz, Germany, she enjoyed traveling to various countries in Europe. While stationed abroad, Maria participated in choir groups in Mainz, Germany, Fort Gulick, Panama Canal Zone and sang with the USO where she met Bob Hope. Maria Antonia was passionate that “education was the great equalizer”. When Juan was stationed in Vietnam, Maria started her bachelor’s degree and also cared for her four young daughters. She pursued a Bachelor's degree in English literature and in Education at Austin Peay State University, and was a member of Toastmasters International and the APSU Foreign Language Society. She was a voracious reader and her favorite authors were John Donne, Charlotte Bronte and Lord Byron. She completed her undergraduate degree and surprised Juan by inviting him to her college graduation for her to receive her bachelor’s degree! She also continued to take classes in pursuit of a master’s degree. Maria was employed as an English and Spanish teacher at various schools in the middle Tennessee area and in Elkton, Kentucky. She loved introducing her students, most of whom had never even left their hometowns, to traditional Puerto Rican food. She also taught them about the places she had been and that in the future they could travel to these countries as well. To enrich the cultural experience of her Spanish class students from Elkton, KY, she made it possible to take them on a trip to Mexico (Guadalajara and Zacatecas). She inspired students to find their dreams through hard work and education, and to expand their horizons. Over the years her students would contact us to say how she made such a positive impact on their lives and how they saw the world. After retiring from teaching she was employed at Jostens in Clarksville, TN for several years. As a great lover of the humanities, Maria attended theater productions performed on Broadway in New York City, and at APSU and made certain her children did too. She was very social in her multicultural environment as an Army wife, and spent time with the various friends she met from the military, the Immaculate Conception Catholic Church in Clarksville, TN, as well as the foreign language students at APSU. Her favorite hobby was gardening and she would spend hours maintaining her vegetable and flower gardens, and feeding the birds that made her yard their home. She was also a very good dancer. Maria was a kind, vivacious, outgoing, and a social butterfly, who had a beautiful smile and a contagious laugh. She was a dynamic conversationalist and approachable, able to chat with anyone. She was an altruistic person caring for the needs of others and welcoming them into her home. Maria is survived by her daughters: Rosalind Smith (Michael) of Tyler, TX; Lorraine Rea (Kevin) of Clarksville, TN; Patricia Rivera of Fairbanks, Alaska; grandchildren: Jason McKibbon, Marlisa McKibbon (Randy Ramirez), Franchessca Castellanos (Dennis), Christina Smith (Ryan), Meagan Miller (Ben); twelve great grandchildren and numerous nieces and nephews. Fond memories and expressions of sympathy may be shared at www.SunsetNorthFuneralHome.com for the Rivera family.
See more See Less

In Memory Of Maria A. Rivera