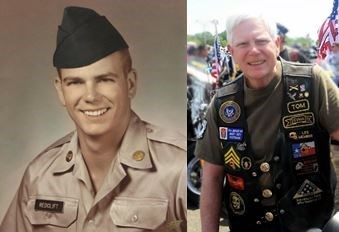 Thomas Redclift, 72, of Canyon Lake, Texas, passed peacefully, surrounded by love on December 23, 2018 after 5 years living with cancer. Tom was born on May 8, 1946 to Ruth Hehn Redclift and Thomas Redclift of Harrisburg, Pennsylvania . He graduated from Cedar Cliff High School in 1964 and earned a degree in Accounting from Rider College in Lawrenceville, New Jersey in 1968. Tom bravely served his country in the Army 23rd Infantry Division, 11th Field Artillery in Vietnam, earning distinction with a bronze star with valor and two purple hearts. A talented accountant and business executive, he led several successful companies before retiring in 2009. His passion for riding motorcycles and supporting veterans causes was evident in his dedication to numerous civic organizations including the Combat Veterans Motorcycle Association (CVMA) and Patriot Guard Riders. He was deeply committed to recognizing the service and sacrifice of American military service members. Tom leaves as his legacy his children Jeff Redclift (wife Karin Redclift) of San Jose, California; Deneen Steiner of Schertz, Texas (fiance Chris Greene); Shannon Brown of San Antonio, Texas; and Amy Heald (husband Kevin Heald) of Arlington, Virginia. He also leaves to cherish his memory five grandchildren Kaeli (22), Andreas (18), Juliana (14), Denver (2), and Tanner Thomas (1) and his beloved dog Aida. He was also survived by two sisters Donna Rupp (husband Michael) and Gale Rimbenieks (husband Vents). His former wives Lois Redclift and Darlene Redclift will also remember him with great fondness. The deep sense of loss felt by all is a testament to the selfless, kind, and above all, honorable man he was. A memorial service is scheduled on January 24, 2019 at 12:00pm, at Sunset Funeral Home (1701 Austin Highway) with military honors following at 1:30pm at Fort Sam Houston National Cemetery (1520 Harry Wurzbach Rd, San Antonio). The family requests that donations in Tom’s honor be made to a military or veterans cause close to your heart.
See more See Less

In Memory Of Thomas Redclift II