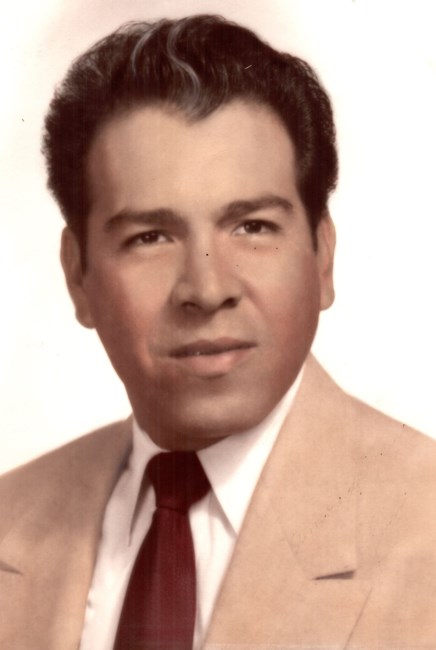 Wenseslado Ramirez Carreon went to be with the Lord on January 13, 2023. He was born in San Antonio, Texas, on September 28, 1925, to Ignacio Carreon and Maria Ramirez. Jesse, as he was known by his family and friends, at a young age joined the U.S. Navy and became a World War II veteran. Upon leaving the military, he spent many years working civil service at Kelly Air Force Base. Throughout the years, he was an active member of the St. Luke’s Catholic Church Men’s Club. He is preceded in death by his parents, siblings Acencion, Pedro, Trinidad, Gregorio, Carmen, Eleanor, Ignacio Jr., and grandchildren Lily and Lucy Carrillo. Jesse is survived by his loving wife of 68 years Mary, sons Nicholas, Gilbert and wife Gloria, and daughter Rita and partner Jo Ellen. His seven grandchildren, Melissa, Jessica, Nicole, Brenda, Gilbert Jr., Nicolas, and Natalie will truly miss his stories. Jesse’s eight great-grandchildren would always bring a smile to his face. He will be deeply missed and survived by his siblings Theresa, Daniel, Mary, Isabel, and Joe, and numerous nieces and nephews. The family would like to thank Heart to Heart Hospice and the VA Hospital for their services. W.R. "Jesse" Carreon will be at St. Luke's Catholic Church on Thursday 2/2 @ 9:30am The Church has a live feed on Facebook at: Facebook.com/StLukeSanAntonio
See more See Less