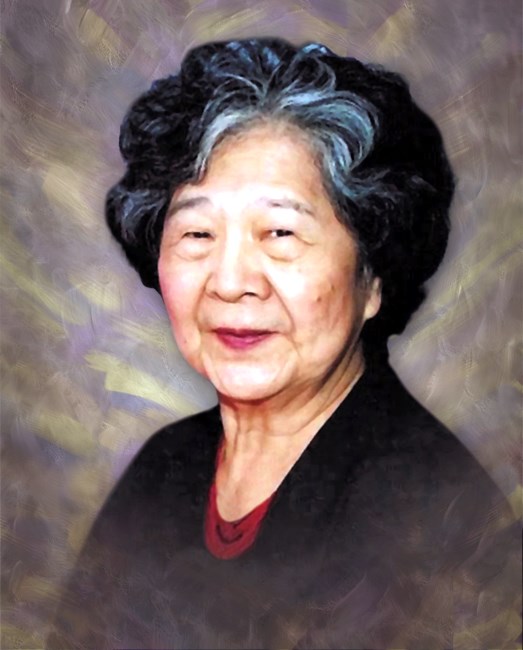 Obituary of Ann Li-Chhing Hsu Kao (高許麗卿) Ann Li-Chhing Kao, age 84, passed away peacefully on May 4, 2022, with her beloved husband by her side. She was born on September 25, 1937, in Taiwan to Pastor and Author Shui-Lu Hsu(許水露) and Lois Chen Hsu (許陳金杏). Ann is survived by her husband Pastor Thomas Bun-Chhong Kao(高文宗), and four children, Susan (Scott) Lu, Tom (Helen) Kao, Rebecca (John) Choi, and Bill Hsu, and her God-daughter, Judy. She is also survived by her ten grandchildren, Joshua, Thomas, Tiffany (Stan), Estelle (Jonathan), Timothy, Theodore, Terrance, Aslan, Narnia, and Tobias, and great-grandchild, Micah, Ann is also survived by her seven sisters, Ruth, Reiko (Kato), Grace (Ken), Martha (Mu-Tauh), Helen, Terri, and Amy (Donald), and their children. All of these she loved and touched deeply. Ann was a God-fearing prayer warrior who humbly and diligently served the LORD and others with a joyful heart. God gifted Ann with many talents including sewing and making crafts, including baby shoes, designing and knitting beautiful sweaters, making matching dresses for her two daughters, and teaching silk flower arrangements. Ann worked in a bank prior to her marriage and then taught piano for many years, all while serving and caring for her family tirelessly at churches where her husband pastored. Her hands were rarely still and if they were, you would find her sitting quietly reading a book or playing Chinese Checkers by herself. Often, you would find her humming her favorite hymns while she cooked. In the later years of her life, she loved visiting the ocean and watching the sunset. But above all else, she loved being surrounded by all her children and grandchildren. As the fifth child of eleven from the first-generation Presbyterian Pastor in Taiwan, Ann learned to serve humbly and diligently with a joyful heart with her eight sisters and one older brother (Ann’s baby brother passed away in his infant years). Her father, Hsu Shui-Lu, was imprisoned by the then Japanese-occupied Taiwan due to his Christian belief for three years but not in vain. Ann’s mother, Lois, was a woman of God who loved sharing the Gospel to anyone she met and was known for her faithful walk with the LORD; she prayed like no other. Ann met and fell deeply in love with Thomas at the church her father pastored in Douliu. After marrying into Thomas’ family, Thomas was soon called to missionary work, bringing the Gospel to the aboriginal tribes far away in the Taiwanese mountains. During this time Ann worked tirelessly alongside her virtuous, God-fearing, and God-loving widowed mother-in-law, who was single-handedly supporting seven children by raising pigs and practicing Chinese medicine. She often did so as charity to those who could not afford to pay. As their family grew, Ann faithfully taught her four children to pray and memorize Bible verses and sang hymns every night regardless of how physically tired she might be. Later, Ann and Thomas moved their family to Taipei to serve at Ann’s father’s church when he was near his passing from Leukemia. While on his deathbed, Pastor Hsu, Ann’s father, made a request for Ann’s youngest infant son, Bill, to carry on the Hsu family name since both of his two sons had died during the 228 Massacre (Ann’s oldest sister, a nurse, also passed away during this time). In 1978, Ann and Thomas immigrated to New York where they continued to serve God by building churches that served fellow Taiwanese-speaking immigrants. During this time, Ann learned to knit and often designed sweaters for major department stores; with the help of Thomas and their two older children, Susan and Tom, Ann used these skills to support their family of six. In 1992, Ann and Thomas moved across the states, settling in San Diego, California, surrounded by their sons and daughters. Once again, they continued to plant and shepherd a Taiwanese-speaking community church until the lockdown of COVID in 2020. Throughout her life, Ann joyfully and faithfully served alongside Thomas as they dedicated their time of worship and fellowship to the LORD with other families until the onset of her Alzheimer’s in 2017. Her kind heart and quiet demeanor made others feel comfortable and welcome. Even during her illness, she greeted family, visitors, nurses, and doctors with her signature angelic smile. Please join us in celebrating her life on Sunday, May 15, 2022, at El Camino Memorial. The viewing will be held from 10 am to 12 pm and the Memorial Service will be from 12 pm to 1 pm. We would love for you to join us for a light lunch and snack reception immediately after the service from 1 pm to 3 pm. El Camino Memorial 5600 Carroll Canyon Road San Diego, CA 92121
See more See Less