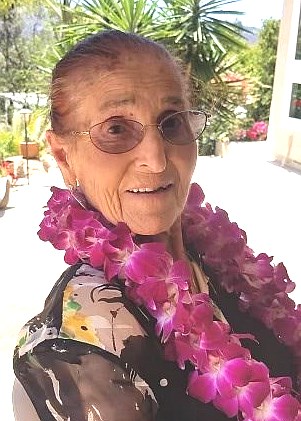 Demetria (Tselikis) Anastasopoulos was born in the small town of Kalithea, Greece in 1928, the fifth of six children. Her life was marked with poverty and tragedy in her early years, living through the war in mainland Greece and having lost her father and sister at a young age. She found work in the rice fields where she met her husband, George, falling in love with his singing as he entertained his fellow workers. Looking for a better life, Demetria followed her sister and immigrated to Montreal, Canada in 1953, where she set up a home base and found work as a fur seamstress. She eventually brought George and seven of his siblings one-by-one to Montreal, where she housed them in her home and supported them until they made their own way. She and George eventually married in Montreal and welcomed their three children, Nicki, Anastasia, and Anastasios. In 1970, George and Demetria moved the family to Lowell, Massachusetts where they stayed two years before moving again to New York City. Always searching for the perfect place for their family, Demetria and George moved many times, living in San Francisco, Oakland, Daytona, Las Vegas, Palm Harbor, San Diego, and finally settling in Escondido. Demetria lived the last 27 years of her life in Escondido, raising her grandkids, Jessica and Anthony, and finding her forever community at Sts. Constantine and Helen Greek Orthodox Church. After losing her husband George in 2008, Demetria found strength in her family and church where she continued to give her love and support. Demetria always loved to cook and spent many years supporting the family restaurant business by working tirelessly as the head chef and prep cook. The love she had for all showed in the meals she lovingly prepared and the hugs she would give to her family, friends, and even strangers. She was at church every Sunday, and was happy to volunteer whenever asked - always ready to help or cook, to bring out a smile to all those around her. Demetria had a unique sense of humor and was always laughing, whether at the funny dances of her children and grandchildren or at a dirty joke. She loved watching dramatic soap operas, daytime talk shows, and WWE wrestling, even attending a WWE wrestling match with her son Taso and grandson Anthony, a memory they'll never forget. Demetria was known as the best tsamiko dancer in the family, and her dancing always brought tears of joy to all those who witnessed it. She had the greenest thumb anyone could have - often planting branches and bulbs and seeing them flourish into the sweetest citrus trees and brightest bougainvillea you've ever seen. The unconditional love for her children, grandchildren, and great grandchildren was the most pure and inspirational part of her. Our dear mother and yiayia peacefully passed away on Friday, January 13th, in her home in Escondido, California at the age of 94. This was a promise we made to her - that she would be lifted to heaven from her own home in the loving arms of family. We will miss her dearly but will never forget her selfless spirit and kind soul. Demetria is survived by her children, Nicki Cometa, Anastasia (and Lambros) Tsoukalas, and Anastasios Anastasopoulos, her grandchildren, Jessica (and Kristopher) Captanis, Anthony (and Payton) Cometa, Georgia Foundas, Tasso (and Tina) Tsoukalas, Tristian, Brenden, and Tianna, and great grandchildren, Leonidas, Elia, Knox, Kristian, Adon, Elunia, Jaxon, Alexander, and Anthony.
See more See Less

In Memory Of Dimitra (Demetria) Anastasopoulos