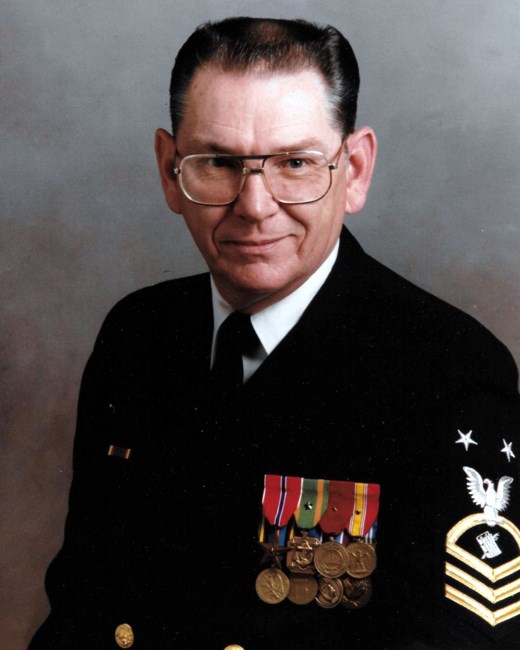 Master Chief Petty Officer Jack Lee Maynard, US Navy (Retired), 86, passed peacefully in his home surrounded by family on Friday, August 12, 2022. Jack was born August 14,1935 in Kermit, West Virginia to George and Mae June Maynard. The Maynard history and family roots run deep in Kermit. His Great-grandfather was the first Mayor of Kermit. The influence of his father, a coal miner, along with several other interesting characters, molded Jack into the man he was. He was from humble beginnings, surrounded by hard working families, and that is what forged in him a strong work ethic and pride in his hometown. He carried these characters and their stories with him and loved to share those memories with his family. In high school Jack played the snare drum and the bass drum in the high school band, but he didn’t graduate with his class. Instead, at the age of 17, Jack enlisted in the United States Army to serve his country as a Tank Gunner in the Korean War. He served three years in the Army with one tour in the Korean War, earning him the Bronze Star for his heroism. After the war, Jack came home, earned his GED, and went on to enlist in the United States Navy, where he did two tours in the Vietnam War. Jack retired in1987 as a Master Chief Petty Officer, a well-decorated veteran, and very proud to have served his country for 35 years. Although Jack had not smoked a pipe in years, the image of him smoking his pipe while watering his lawn or building something around the house is forever burned into his family’s memories. His pride and joy were his home, his wife of 55 years, and his 5 children, 10 grandchildren and 15 great grandchildren. Jack will be remembered as a very loving and devoted husband, father, grandfather, and great-grandfather. Jack is survived by his brothers, Bill Maynard, George Maynard (Bettie Mae), and Don Maynard; his sister, Peggy Dotson; his children, Jack Maynard Jr. (Sandy), Leslie Reynolds (Lee), David Maynard (Elizabeth), George Maynard (Sandy), Jeanette Nerida (Henry), and many grandchildren and great-grandchildren. Jack was preceded in death by his parents, George and Mae June Maynard, his wife of 55 years, Sharon Maynard, his sister-in-law, Florene, and his brother-in-law, Charles. Visitation for Jack will be held on Friday, September 2, 2022, from 10:00 a.m. – 12:00 p.m. at El Camino Memorial Park, 5600 Carroll Canyon Road, San Diego, CA. A Celebration of Life service, also at El Camino Memorial Park, will follow from 12:30 - 1:30 p.m. A committal service, with full Military Honors, will be held from 2:15 – 2:45 p.m. at Miramar National Cemetery, 5795 Nobel Drive, San Diego, CA.
See more See Less

In Memory Of Jack Lee Maynard