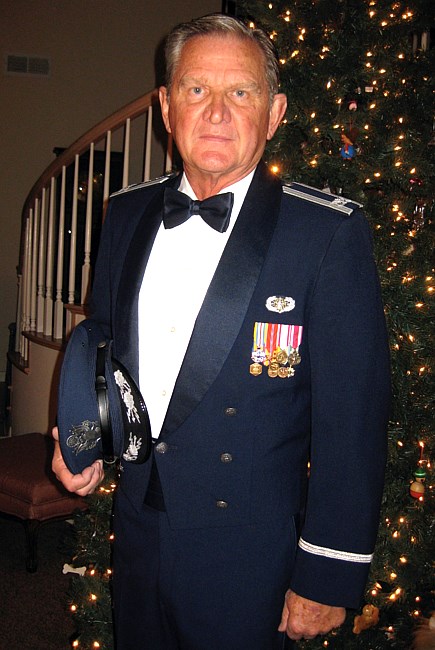 Col. Kenneth (Ken) D. Tollefson, USAF, retired, passed away December 25, 2017, at his home, in the presence of his loving family and beloved dog, Kiwi, in San Diego, California. Ken was born in Montello, Nevada on May 28,1939, a member of a pioneering ranching family. His family later moved to Sparks, Nevada where he graduated from Sparks High School and the University of Nevada. He later obtained his Master’s Degree from New Mexico Highlands University.

At the age of 17, Ken enlisted in the Nevada Air National Guard. In 1968, his Guard Unit was activated as a result of the Pueblo Incident. He had a 35 year distinguished military career in the U.S. Air Force during which he was awarded the Bronze Star and, upon his retirement, was awarded the Defense Distinguished Service Medal.

Ken’s military career included tours of Vietnam, Germany, and assignments in the United States. He had a major role in experimenting with developing laser technology, the building of the B-1 Stealth bomber, the reactivation of the SR-71 (Blackbird, Mach 3+ strategic reconnaissance aircraft), and, ultimately he oversaw the engineering, from ground up through initial production, of the C-17 Globemaster III for the U.S. Air Force. He also is one of four distinguished students from the 1982 U.S. Air Force Air University Command and Staff College (ACSC) that created the Air Force’s “Gathering of Eagles” that capstones the ACSC curriculum.

In recent years, Ken found great pleasure as a volunteer at The Flying Leatherneck Aviation Museum on the Marine Corps Aviation Station Miramar. He enjoyed giving tours of the museum, developing educational materials for elementary through college classes, and writing articles about individuals who had served in the military. He was dedicated to preserving the history of the United States Military and the stories of those who had served valiantly.

Ken was an active member of the St. Therese of Carmel Catholic Church where he volunteered as a Minister of Hospitality. In his spare time, he enjoyed traveling. He loved railroad history, as well as, building and designing his own model train layout. Ken was also a master craftsman often creating special gifts for his family and friends.

Ken’s greatest joy was being at home with his family and enjoying cocktails on the patio with his wife, Jacklyne.

He is survived by his wife of 58 years, Jacklyne, his children, Terri, John (Gina), and Kevin (Amy) and grandchildren Eileen, John, Joseph, Catherine, Luke, Jacob, and Claire, his sister Carol Coppola (Ralph); and numerous nieces, nephews, and cousins. He was preceded in death by his parents, John and Roseline Tollefson, his brother John, and his grandson Samuel.

Burial will be at Miramar National Cemetery in San Diego, California.

In lieu of flowers, the family requests that you give to the charity of your choice in Kenneth’s name or to his favorite charity, The Flying Leatherneck Aviation Foundation at P.O. Box 45316, San Diego, CA 92145-0316

In Memory Of Kenneth Dee Tollefson