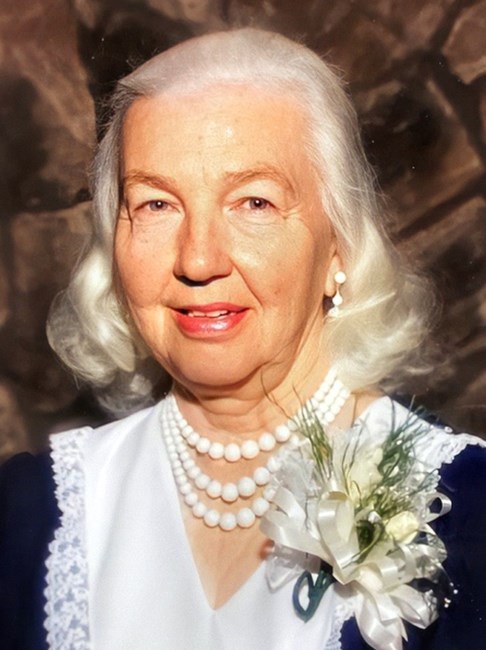 Lyola E. “Fritz” (Morgen) Jensen passed away on Monday, September 12, 2022 in Poway, CA at the age of 99. She died of natural causes. Lyola was born on May 21, 1923, the second of six children, to Chris and Gertrude Morgen of Warner, SD. She grew up on a farm outside of Warner and attended a one-room country school with her sisters and brothers, completing eight years in only seven years. She played sports and the saxophone in the high school band and graduated from Warner High School in 1940. As a young girl, she and her older sister, Lyvonne, acquired the label of “Hans and Fritz”, and Fritz stuck with her throughout her entire life. In the fall of 1944, Fritz enlisted in the Navy. She was trained in the medical corps at Hunter College, NY and Bethesda, MD and served as a Pharmacist’s Mate in the Navy Medical Corps at Great Lakes, IL. She was honorably discharged from the Navy in April of 1946. She continued to live in Detroit, MI for a short time, then moved back home to South Dakota and went to college in Aberdeen, SD. In 1952, she moved to San Diego, CA, where she has lived since then. She married Roy Jensen from Zell, South Dakota in San Diego on March 19, 1952. The couple divorced in 1965. Fritz worked for the City of San Diego Street Division as a senior clerk for many years; the “hub” of the office. She retired in 1983 and remained active with the retirees, organizing a yearly luncheon for all of the other retirees, continuing as the “hub” even after she was no longer working. Fritz was an avid sports fan and, as appropriate, held her retirement celebration at a San Diego Padres baseball game, where they congratulated her on the scoreboard. She was a devoted member of the parish at Immaculata Catholic Church and spent hours volunteering her time to count the weekend donations. Fritz loved the written word and exchanged letters and cards with family and friends. Even after her memory began to fail, she could recite addresses from friends after decades of years. Fritz could often be found watching sports. She was particularly fond of baseball, but also enjoyed football, hockey, and golf. San Diego teams were always her favorite, but she did not discriminate when there was a game on TV. She also loved to travel and after her retirement enjoyed visiting her many nieces and nephews around the globe and taking trips with friends and family. Her sister-in-law, Bernie, was a favorite travel companion. She returned to visit her beloved South Dakota nearly every year, often spending summers at Pickerel Lake as she did as a child, though San Diego was her “perfect weather” home and she faithfully returned to “the other SD”. She always had a bed ready for visitors and many nieces and nephews recall visits to exotic destinations such as Disneyland and the Wild Animal Park with Auntie Fritz. Lyola was preceded in death by her parents, Chris and Gertrude (Weinreis); her sister Lyvonne (Everett) Thorson; her sister Dot (Don) Meyer and nephew, Bob Meyer; her brother Bill (Doris) Morgen; her brother Chuck (Bernie) Morgen and infant niece; and her brother Jack Morgen. She is survived by her sister-in-law, Gwen Morgen, 30 nieces and nephews and dozens of great nieces and nephews, cousins, friends, and former coworkers. Her life will be celebrated in a funeral mass at Immaculata Catholic Church, San Diego, CA on Thursday, October 27, 2022, at 11:00 AM, with internment at 1:30 PM at Miramar National Cemetery. Memorials in lieu of flowers can be made to the Women in Military Memorial at Arlington National Cemetery, https://womensmemorial.org/ , or The Immaculata Catholic Church, https://www.theimmaculata.org/ .
See more See Less