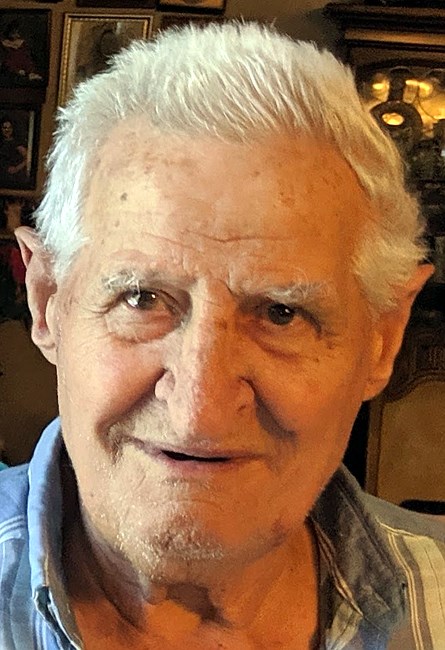 Giovanni Doré sadly left us on January 13, 2023, 29 days shy of his 96th birthday. His last words spoken an hour before his last breath, were “Vado a tavola a mangare con mio figlio, mia figlia e mia mamma.” Giovanni was born in Ittiri, Sardagnia on February 11, 1927 to Gaetano and Serafina Doré. He spent most of his youth working on the family property growing grapes and olives. He joined the Italian army at the end of WWII and then moved to Avril, France in 1952. Giovanni met the love of his life, Palmira Ingrao, in January of 1954 and married her six months later on July 31, 1954. He worked long hours and extra shifts in the ore mines for the benefit of his family. Giovanni and Palmira had three children together: Gaetano, Marie Jose and Rita. The family moved to San Jose, California in July of 1973. He worked as a Machinist manufacturing transformers until he retired in 1996. Giovanni was a hardworking man who treasured his family, took pride in cultivating his garden, enjoyed making wine for his family and friends and loved sharing his garden’s fresh fruits and vegetables. He is predeceased by his son and his daughter, Gaetano Doré and Marie Jose Reeves and remained heartbroken by the unexpected loss of his two children. He leaves behind his beloved wife, Palmira Doré, his daughter, Rita Doré Del Ponte (John), daughter-in-law, Teri Dore, son-in-law, Larry Reeves, his five grandchildren; Catalina Del Ponte Sodos (Michael Sodos), Sabrina Del Ponte, Nathan Doré, Christine Medina and Amanda Kendal (Ryan) and his five great grandchildren; Cataleya Doré, Eliana Barragan, Elijah Medina, Ella Kendal and Leah Kendal. Giovanni will be greatly missed and will live forever in our memories and in our hearts. A visitation for Giovanni will be held at 12 p.m., Monday, January 23, 2023, with a funeral service beginning at 12:30 p.m. at Lima Family Erickson Memorial Chapel, 710 Willow Street, San Jose. Graveside service to follow at 2 p.m. at Calvary Catholic Cemetery, 2650 Madden Avenue, San Jose, CA 95116.
See more See Less

In Memory Of Giovanni Doré