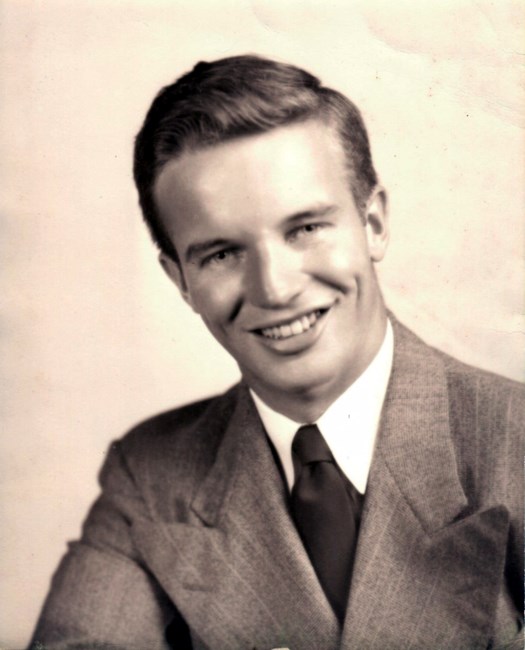 Ralph Malcolm Titcomb died peacefully in his East Sandwich home on Sunday, April 26 th with his wife of sixty eight years by his side, surrounded by family members. Ralph was born in Houlton, Maine during a blizzard on January 15, 1927 to Orie Nevers Titcomb and Gladys Brown Titcomb. He grew up on a potato farm in Littleton, Aroostook County, Maine. As a child, Ralph attended a one-room schoolhouse, and had fond memories of riding to class through the snow in a horse-drawn sled with a wood stove for heat. Ralph left high school early to join the U.S. Merchant Marine at the end of World War II and served as a radio operator on a Liberty Ship. He later served in the US Army during the Korean War and attended Officer Candidate School at Fort Belvoir, Virginia. Ralph attended the University of Maine, which held a special place in his heart. He earned a Master’s Degree in Mechanical Engineering and met the love of his life, Nancy Ericksen, on a blind date at a university football game. Newly married, Ralph and Nancy began their family on campus, bringing the first of their eight children home to their student apartment. After graduating, Ralph began a career in nuclear engineering, a new industry at the time. He worked first for General Electric at the Knolls Atomic Power Lab in Niskayuna, New York and went on to work on the installation of the nuclear reactor for the submarine, USS Narwhal, at the Electric Boat Company in Groton, Connecticut. When Ralph’s job with GE brought him to work at Pilgrim Nuclear Power Plant in Plymouth in 1969, he, his wife, and children settled into their home in East Sandwich, Massachusetts. Ralph discovered a love for antiquarian books after his children unearthed a collection of old papers and books tucked away in the barn when they were living in Canterbury, Connecticut. This discovery led to the opening (in their spare time) of a small bookstore adjacent to their home fifty two years ago. The bookstore became Ralph and Nancy’s full-time endeavor after Ralph’s retirement from his career in engineering. His sons, Ted and Paul, crafted the three story barn that houses the bookshop as it is today as well as a life-size statue of a colonial man. In recent years, Ralph could be found sitting in a chair outside, greeting customers with his radiant smile and striking up conversations, his face lighting up with any mention of the state of Maine. Ralph was a fifty year active member of First Lutheran Church in West Barnstable. He also volunteered with his wife every week through the Chaplain’s Office at Cape Cod Hospital. When not at home, Ralph loved to travel with his beloved wife; a favorite journey was exploring England by canal boat. They also traveled to ancient cultural sites in Greece, Turkey, China, and the U.K. Ralph was a gentle man; the words “wait until your father gets home” never held much sway with his eight children. A loving grandfather, he will be remembered for bouncing each new grandchild on his knee while singing the song his own grandfather sang to him as a young boy. Teaching by example, he touched the lives of many with honesty, humbleness, and gentle kindness. He was predeceased by sister Florence Eaton and brothers Edward Payson Titcomb and John Titcomb. He is survived by his wife Nancy Ericksen Titcomb and their eight children: Vicky Titcomb and husband William Beardsley, Ted Titcomb and wife Dorsey Johnson, Wendy Titcomb Klein and husband Michael, Paul Titcomb, Sara Titcomb McDermott and husband Thomas, Andrew Ericksen Titcomb and wife Geraldine, Amy Titcomb Conway and husband Jonathan, and Nancy Titcomb Ockers and husband Matthew. His twenty-one grandchildren and one great grandchild also survive him: Daniel Klein, Peter Klein, James Uminowicz and his wife Tracey, Sophie Klein Greenfield and her husband Tyrone and daughter Nadia, Benjamin Titcomb, Paige Titcomb, Eliza McDermott, Molly McDermott, Payson Titcomb and his wife Rosie, Claire Titcomb, Helen Titcomb, Rae Titcomb, Abbie Titcomb, Jane Conway, Timothy Titcomb, Eleanor Titcomb, Jay Titcomb, Dylan Conway, Adam Ockers, Maeve Conway, and David Ockers. The Titcomb family would like to extend their gratitude to VNA Hospice, which provided excellent home care that allowed Ralph to remain comfortably at home with his family. In lieu of flowers, donations may be sent to First Lutheran Church in West Barnstable to spread the love of God’s word, and to the Thornton Burgess Society Green Briar Nature Center in East Sandwich to teach the love of the natural world. To send online condolences, please visit www.dignitymemorial.com/obituaries. Due to the coronavirus, there will be a memorial celebration at a later date.
See more See Less

In Memory Of Ralph Malcolm Titcomb