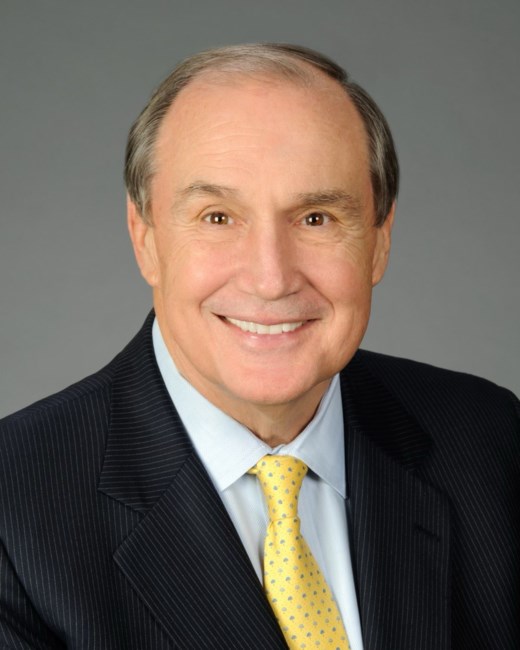 On Monday, October 19, 2020, David H. Flint, loving husband, devoted father and grandfather, accomplished lawyer, cherished friend, and pillar of the community, passed away at the age of 75. David was born on July 31, 1945, in Birmingham, Alabama, to Julian and Mary (Doyle) Flint. He overcame great obstacles to become a successful lawyer and accomplished person. Orphaned at a young age, David spent his childhood in a variety of places, including Birmingham, Alabama; Florence, Alabama; Mt. Airy, Georgia; and ultimately Decatur, Georgia, where he graduated from Decatur High School in 1963. He then attended West Georgia College in Carrollton, Georgia, where he met the love of his life, Sandra Lee Love of McIntyre, Georgia. They were married on March 27, 1965, in Newnan, Georgia. After graduating West Georgia with honors, David went to work for Georgia Power Company. In 1967, he enrolled in the night school program at the Emory University School of Law. Despite working a full-time job and raising two young boys with Sandra, he graduated first in the class of 1971. He is the only night law school student ever to achieve the distinction of First Honor Graduate at Emory. In 1974, David and his lifelong friends and partners, Warren Wheeler and Charlie Schreeder, founded the firm of Schreeder, Wheeler and Flint, where he practiced continuously until a few days before his death. He was a giant in the Atlanta legal community. His tremendous intellect and considerable skills were only surpassed by his integrity, empathy, and sense of fairness. Well-traveled and an avid reader, David was a keen observer of life and the human condition and had a vast knowledge not only of the law, but history, literature, and science as well. A mentor to many young (and not so young) lawyers and judges, he was a tremendous source of wisdom, humor, and insight about what it means to be a good person, not just a good lawyer. David, Sandra, and their two sons, Michael David Flint and Bryan Howard Flint, moved to Sandy Springs, Georgia, in 1979, where Sandra and David lived for the rest of their time together. David was an enthusiastic jogger and outdoorsman. He ran the Peachtree Road Race 25 times and did many camping trips with his sons and with his beloved Smoky Mountain Marching and Drinking Society. When he was able to pry himself away from work and home, David cherished spending time on Amelia Island, his favorite getaway, especially when his grandchildren were able to join him. He loved animals and had a series of memorable dogs over the course of his life, none more so than the last one, Max, his faithful and constant companion until the very end (as anyone who visited or had a Zoom encounter with David within the last few months can attest). Simply put, he was the best husband, father, grandfather, and dog dad a family could ever have. Active in the community and generous to a fault, David was a force for good in Atlanta, a city he loved. He served on the boards of directors of the Shepherd Center, American Opportunity Foundation, Buckhead Lions Club, Bobby Dodd Coach of the Year Foundation, Arnold Foundation, Georgia Primary Bank, Westside Bank, Atlanta Law School Foundation, and several others. He was also a member of the Advocates Club, Gridiron Secret Society, Old Warhorse Lawyers’ Club, Capital City Club, Amelia Island Club, Bryan Society, Order of the Coif, University of West Georgia Foundation Board of Trustees, and Georgia State University Law School Board of Visitors. After his sons left the nest, David got involved with the Big Brothers Big Sisters program and became a mentor to his Little Brother, TJ Tambellini, who he maintained a friendship with for the rest of his life. David was a man who genuinely loved people and treated everyone equally and with respect, no matter who they were. He was a world-class storyteller and conversationalist who could find humor in almost everything (even his own plight as his health worsened over the last few weeks). Many of us will remember the cumulative laughter we shared with him over the years, and nobody will ever forget his infectious smile. David will be missed but will live on in those of us who were lucky enough to know and love him. His was a life well lived. David was preceded in death by his mother, Mary; his father, Julian; and his sister, Mary Flint Porter. He is survived by his wife, Sandra; his two sons, Mike (54), married to Lauren (Livengood) Flint, and Bryan (51), married to Stephanie (Walker) Flint; his four grandchildren, Walker Flint (18), Corinne Flint (17), Alec Flint (14), and Andrew Flint (14); his brother, Sam Flint; his niece Samantha (Flint) Bruner; and his nephew, Jeff Flint. A Celebration of Life will take place Wednesday, August 11, 2021 at the Capital City Club Brookhaven, 53 W Brookhaven Dr NE, Atlanta, GA 30319 from 4:00 PM until 7:30 PM with a memorial service at 5:30 PM. Online condolences may be left at: https://www.dignitymemorial.com/obituaries/sandy-springs-ga/david-flint-9857110 In lieu of flowers, the family requests that you consider making a contribution in David’s honor to Furkids, Inc. (formerly Small Dog Rescue, where he first encountered Max, his loyal companion to the end) (www.furkids.org), or the Shepherd Center (where he was a member of the Board of Directors from 1994 until his passing) (www.shepherd.org).
See more See Less

In Memory Of David Howard Flint