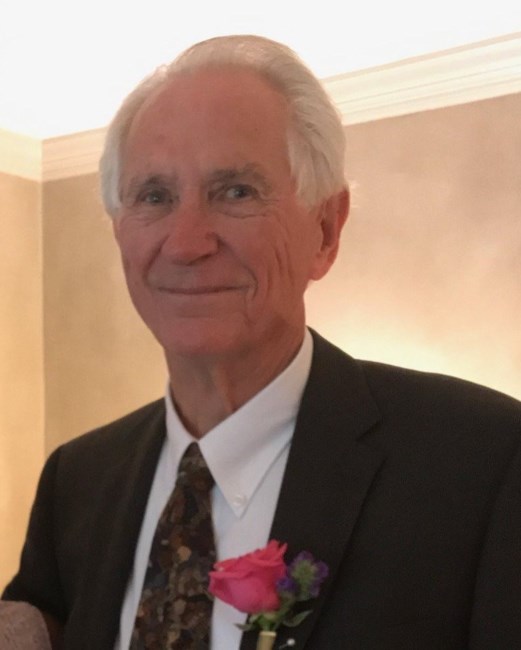 James Roland DeWitt of Atlanta, GA passed away peacefully after a struggle with Lewy Body Dementia at the age of 83 on March 29, 2022 at home in Macon with his devoted wife and caretaker Rose by his side. Roland was born at Georgia Baptist Hospital on December 26, 1938 to Roland Edwin and Annie Miriam DeWitt. Roland was immensely proud of and effusive about his family - the family who came before him and helped make him the man he is, and the family he created and nurtured. He is survived by his wife Rose DeWitt, his children Diana Drake, Jeff DeWitt (Joyce), Deborah Brookshire, and Tim Shannon; grandchildren Madison DeWitt, Melissa Drake, Chloe Brookshire, and Holden Brookshire; stepdaughter Francesca Tuck (Spencer) and stepgrandsons Sebastian Tuck, Nicholas Fasciano (Nicole Thompson), and Christopher Fasciano (Jose). He attended Highland Elementary School and Bass High School, loved playing basketball, selling Coca-Colas at the old ballpark on Ponce de Leon Ave, and driving his friends around in his car nicknamed the DeWitt-Mobile. He was an active member of Druid Hills Baptist Church. Roland was proud to be a Baylor Bear, graduating from the University in Waco, TX in 1960 and studied at Southeastern Baptist Theological Seminary. Roland served as Associate Pastor at Madison Avenue Baptist Church in Goldsboro, NC and Senior Pastor at the First Baptist Church in Lagrange, NC. In 1969, he and his family moved back to Atlanta, and he changed his focus to supporting individuals more directly as a chaplain. Later, Roland worked as a Probation Officer for Fulton County. His dedication to social justice and desire to follow in the footsteps of his father, who attended law school and was a Justice of the Peace, led him to attend Woodrow Wilson Law School in Atlanta. In 1980, he was sworn in as a member of the Georgia Bar Association and worked in private practice as a criminal defense attorney in Fulton, Dekalb, and Cobb counties. Roland dearly cherished the friendships he made at work. He ended his career on a high note by defending a client who spent time at Central State Hospital, which is where Roland met his wife Rose who is a Social Worker at the Hospital. Roland felt exhilarated in the outdoors, expressing a deep fondness for nature where he often said “I can just be me.” He camped, hiked, biked (across Georgia several times), canoed and rafted, ran the Peachtree Road Race more than a dozen times, demonstrated his playful and competitive spirit on the tennis and racquetball courts, and rarely missed going to local festivals, parades, and holiday fireworks. He shared his appreciation for the outdoors with his family, taking them on expeditions to the mountains and beaches, and stargazing during campouts on the back porch with the grandkids. His pets were a great comfort and joy throughout his life; he loved and cared for his many dogs and cats as members of his family. Roland also had a passion for music (all types!) and dancing (anywhere, any time, and may have even created a few unique dance steps). Roland never met a stranger. He would build connections everywhere he went, whether it be at his grandkids’ ballgames or recitals, restaurants, the local grocery store, the DMV, or drum circles. He prided himself on finding common threads with those around him, from all walks of life. Respect for others was returned as Roland was called upon to officiate weddings and funeral services of family members and friends. Roland was a man of profound faith, first at the Baptist Church, then at the Unitarian Universalist Congregation of Atlanta, followed by St. Luke’s Episcopal Church, and finally at Northwest Unitarian Universalist Congregation. He felt a strong kinship with his Irish heritage and expressed abiding appreciation for Native American culture, longing to go back to the pow-wow one last time. A memorial service will be held at Northwest Unitarian Universalist Congregation at 11:00 AM on Saturday, April 9, 2022 at 1025 NW Mt Vernon Hwy, Sandy Springs, GA 30327 with a reception to follow. In lieu of flowers, donations may be sent to the Lewy Body Dementia Association at https://www.lbda.org/donate/.
See more See Less

In Memory Of Roland Dewitt