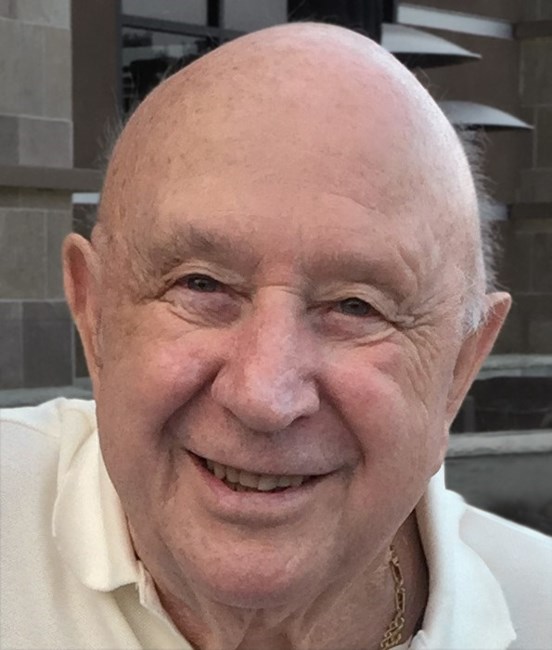 Wayne Richard Pompeo passed away on April 30, 2020 at the age of 89, in Orange, CA, after a brief illness following a fall. Wayne was born in Dawson, New Mexico on February 8, 1931 to Salvatore (Sam) Pompeo and Gladys (Cullender) Pompeo. Wayne’s mother passed away when he was six from pneumonia, and Wayne and his father lived with his paternal grandparents for several years before Sam remarried. Wayne was the eldest of four siblings: Fred Pompeo, who passed away in 2018, James (Skeezix) Pompeo of Mesa, Arizona, and Donna Sue Garcia, of Scottsdale, AZ. Wayne often spoke of his grandparents’ kindness and praised his grandmother’s wonderful Italian cooking. His father’s family immigrated to America from Pacentro, Italy, and Wayne was always proud of his Italian heritage and loved Italian cuisine. He was famous for his meatballs, and, unfortunately for those who would like to replicate them, he made them without a recipe, like a real chef. His father, Sam, was the mayor of the small town of Maxwell, New Mexico for 32 years, and he owned the telephone company in Maxwell, where Wayne spent many long afternoons from the age of nine working at the switchboard (think Lily Tomlin in “Laugh-In”). An excellent student, Wayne graduated first in his class from Maxwell High School (years later his wife would tease him, wondering aloud whether this was truly a monumental accomplishment, given that there were but four students in his graduating class). He played basketball and his favorite teacher was his English teacher. After high school, Wayne enrolled in college, declaring a political science major, at the University of New Mexico. He left college to join the Navy in 1951, serving in the Korean War as a radio operator on the Naval ship the U.S.S. Rupertus. After leaving the Navy in 1954, he joined his cousin Louie in California, where Wayne lived for the rest of his life. He worked for Standard Pressed Steel (SPS) for close to 50 years, as an inside salesman and production control manager. Early in his tenure at SPS, he met Dorothy Mercer, a native Kansan, on the telephone as he had to speak to her boss at Boeing in Wichita nearly every day. He thought she “sounded pretty,” and a long-distance romance blossomed that was conducted exclusively via telephone, telegraph, and floral arrangements. Just a few months into their courtship, Wayne flew to meet Dorothy on St. Patrick’s Day 1961, and they were married on September 2 of that year. Together, they moved to Santa Ana, CA. Wayne and Dorothy had three children, Michelle, Michael (Mike), and Mark in their first four years of marriage, and they were devoted and loving parents. Wayne coached his sons’ Little League and club basketball teams for years, and never missed a Father-Daughter banquet or dance with his daughter or any of her choir performances. He was perhaps never happier than when he took his family camping at beautiful California camp sites, and he and his sons went trout-fishing on a lake at dawn. He loved golfing, playing tennis, and bridge—a highlight of his and Dorothy’s week for many years was having Bob and Mary Golightly over every Friday night to play bridge. He loved fine dining: the Morton’s Steakhouse phone number was saved as a contact on his cell phone. Wayne was a voracious reader (chiefly fiction, politics, and history): his kids could not believe how he dispatched James Michener tomes in an evening or two. He loved playing the craps table in Las Vegas and Atlantic City. He was known for his strong work ethic and his unwavering belief in the virtue of promptness. Wayne loved attending Pompeo family reunions and the reunions for sailors who served on the U.S.S. Rupertus. Wayne was predeceased by his wife, Dorothy. He is survived by his daughter, Michelle Lindfors (Jon) of Orange, CA, an English teacher; his son Mike (Susan) of Arlington, VA, currently serving the nation as Secretary of State; and his son Mark of Santa Ana, CA, a social worker. He is survived by three grandchildren: Nicholas (Nick) Pompeo of New York, NY, and James and Emily Lindfors of Orange, CA. A private graveside memorial service will be held at Fairhaven Memorial Park in Santa Ana, CA on May 8th at 12:00 p.m. In lieu of flowers, donations may be made to the Santa Ana Public Library. Checks should be made payable to Friends of the Santa Ana Public Library. Write Wayne Pompeo Memorial on the memo line. Mail memorial checks to: City of Santa Ana / Attn: Finance Director, 20 Civic Center Plaza M-17, Santa Ana, CA 92701. Fond memories and expressions of sympathy may be shared at www.fairhavenmemorial.com for the Pompeo family.
See more See Less

In Memory Of Wayne Richard Pompeo